Hong Kong media tycoon and outspoken pro-democracy activist Jimmy Lai was sentenced to more jail time Friday over his role in an anti-government protest in 2019, as authorities step up a crackdown on dissent in the city.

Lai, 73, was sentenced to 14 months in prison. He is currently serving a separate 14-month jail term for other convictions earlier this year also related to unauthorized rallies in 2019, when hundreds of thousands repeatedly took to the streets in the biggest challenge to Beijing since the city was handed from British to Chinese control in 1997. Beijing promised that the territory could retain its freedoms not found on the mainland for 50 years.

With the two sentences combined, Lai will serve a total of 20 months behind bars.

The founder of The Apple Daily, a feisty pro-democracy tabloid, Lai is also being investigated under the city’s sweeping national security law, imposed last year, on suspicion of colluding with foreign powers to intervene in the Hong Kong affairs.

Also receiving jail terms of 18 months each were former lawmakers Albert Ho and Leung Kwok-hung, as well as Lee Cheuk-yan, a pro-democracy activist and ex-lawmaker who helped organize annual candlelight vigils in Hong Kong to commemorate the bloody crackdown in Beijing’s Tiananmen Square in 1989.

Figo Chan, head of a political organization known for organizing protest rallies in the city, also received 18 months behind bars. 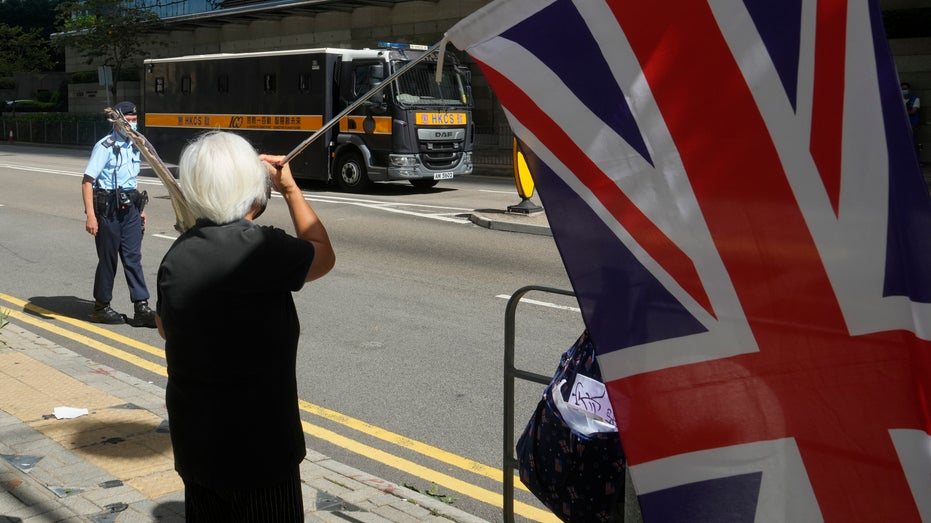 A woman holds a British flag as the prison van carrying Hong Kong pro-democracy activist and media tycoon Jimmy Lai arrives a court in Hong Kong, Friday, May 28, 2021. Jimmy Lai and nine others accused of “incitement to knowingly take part in an unau

Some of the activists are already serving jail sentences for previous convictions and will serve part of their new sentences consecutive to their current jail terms.

Over the past year, Beijing has clamped down on civil liberties in response to protests. Hong Kong authorities have arrested and charged most of the city's pro-democracy advocates, including Joshua Wong, a student leader during 2014 protests. Scores of others have fled abroad.

U.S. Secretary of State Antony Blinken in a statement called on Hong Kong authorities to drop charges filed against people "merely for standing for election or for expressing dissenting views."

"Instead of caring about Hong Kong’s democracy and Hong Kong people’s rights, what it is doing is to meddle in Hong Kong’s politics and China’s internal affairs," Zhao told reporters at a daily briefing. 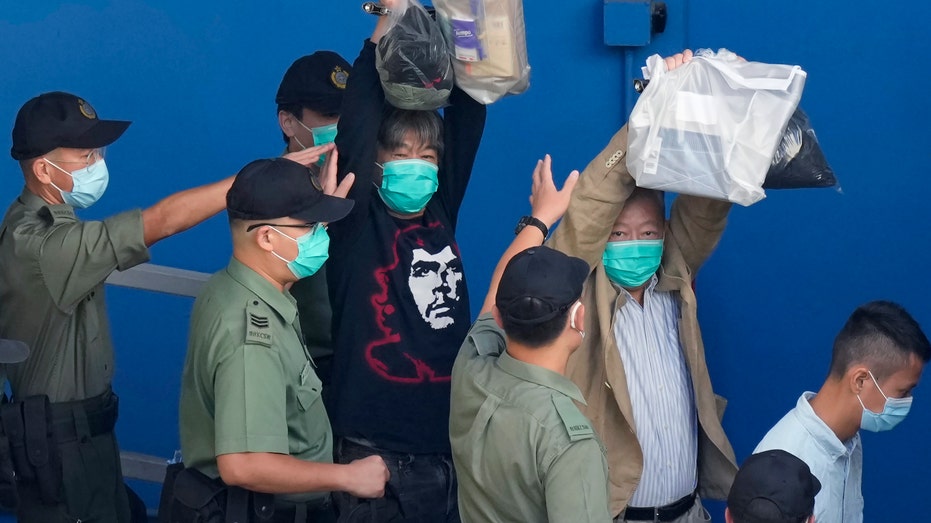 Pro-democracy activists Leung Kwok-hung, known as “Long Hair,” left, and Lee Cheuk-yan raise their hands as they are escorted by Correctional Services officers to a prison van for a court in Hong Kong, Friday, May 28, 2021. Jimmy Lai and nine others

On Thursday, the Hong Kong legislature, which is dominated by pro-Beijing lawmakers, passed a bill reducing the number of directly elected seats and increasing the number of legislators appointed by a largely pro-Beijing committee. The law also ensures that only "patriots" can run for public posts.

Meanwhile, police banned the June 4 candlelight vigil marking the Tiananmen crackdown for the second year in a row citing social distancing restrictions, organizers said Thursday. Hong Kong's security minister warned residents that taking part in unauthorized assemblies is against the law and will be dealt with accordingly.