The home solar business is growing fast as thousands of homeowners install panels on their roofs to save money. Yet the biggest companies that install and finance home solar systems are reporting hundreds of millions of dollars in losses.

Those losses are an ominous reminder of how hard it can be to make money in an industry widely viewed by political leaders and business executives as an important part of the global effort to address climate change. Solving this problem could help determine whether the use of residential solar power is quickly and widely adopted.

“There have been very few success stories,” said Vikram Aggarwal, founder and chief executive of EnergySage, which helps consumers compare solar installers. “Practically everyone who has tried this has failed. The road is littered with dead bodies.”

Sunrun and Sunnova, two of the nation’s biggest home solar companies, lost a combined $500 million in the first nine months of the year, and their operations and purchases of solar systems collectively used up $1.3 billion in cash. The companies and their Wall Street supporters say the losses are occurring because solar installations are growing rapidly and require a lot of upfront investment, and because investors in the companies get to use the losses to offset their tax liabilities. Still, residential solar is a fiercely competitive and expensive business, and Sunrun and Sunnova must contend with hundreds of smaller rivals, many of which have been turning a profit for years.

For now, Wall Street investors are bidding up the companies’ stocks in the belief that solar companies will be able to borrow cheaply and cover their losses and cash outflows for some time. They also expect sales to grow fast as homeowners buy larger solar systems and home batteries to protect themselves from blackouts and to power electric vehicles. Investors are also expecting the incoming Biden administration to do more to spur the use of renewable energy through tax credits and other incentives.

“You are always going to be negative if you are growing,” Lynn Jurich, chief executive of Sunrun, said in an interview. Sunrun acquired Vivint, which was the country’s second-biggest residential solar installer, in a deal announced in July. That acquisition has helped push Sunrun’s stock was up over 400 percent in 2020. Sunnova’s stock was up over 300 percent.

The success of the two companies and Tesla’s solar business, once the leading residential solar installer, matters beyond the stock market. If these companies grow and gain the same sort of name recognition that Tesla did for its luxury electric cars, or Amazon did for online shopping, they could help accelerate a shift away from fossil fuels.

New home solar installations, measured by their power capacity, are expected to grow 7 percent this year despite the coronavirus pandemic, according to the Solar Energy Industries Association and Wood Mackenzie, a research and consulting firm. Wood Mackenzie expects strong growth over the next five years. 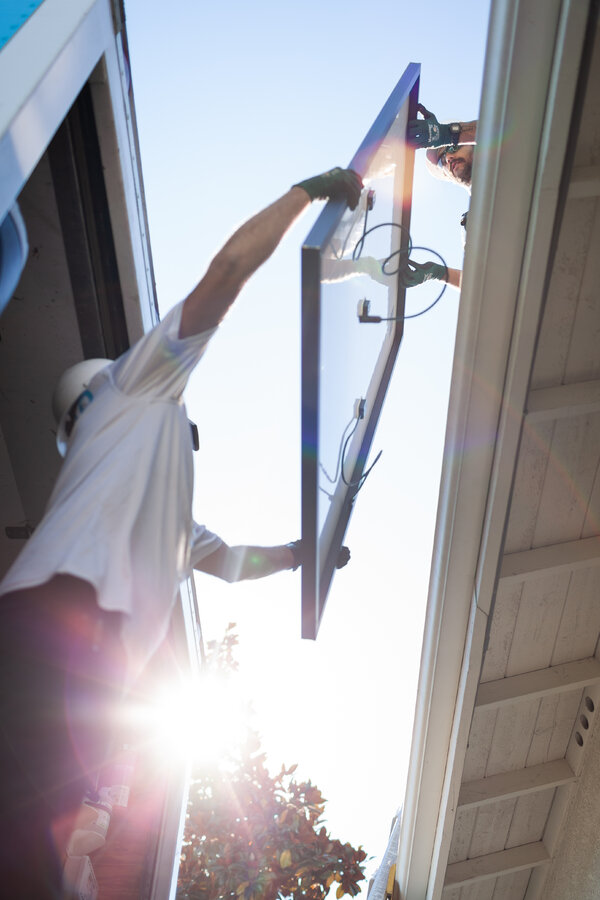 “We’re having discussions as a management team about how much growth we can handle,” W. John Berger, chief executive of Sunnova, said in an interview. “I’ll take that problem any day of the week because I’ve had the other problem, as well,” he added.

But for all that optimism, installing solar in homes is clearly not an easy business. Solar companies that grow too fast often struggle, as SolarCity did before Tesla acquired it in 2016. Many others have sought bankruptcy protection or have gone out of business in recent years.

Dozens of companies like SunEdison, which tried to acquire Vivint in 2016, grew incredibly fast and abruptly stumbled. SunEdison sought bankruptcy protection that same year. Hundreds of smaller residential solar businesses have also failed, according to EnergySage.

It is not clear if it makes economic sense for the solar business to be dominated by national operators like Sunrun and Sunnova. Hundreds of small installers around the United States have already figured out how to make money from what they describe as the kind of home improvement business that local firms typically dominate.

“Solar is sort of this magical technology, and it’s very alluring, and everyone wants to think it’s different from everything else,” said T.R. Ludwig, one of the founders of Brooklyn SolarWorks and a former Sunrun employee. “But, apart from the financing, it really is a construction project.”

His firm buys solar panels through buyer collectives to get lower prices. It does not offer customers financing like Sunrun or Sunnova, but that’s not a disadvantage, Mr. Ludwig said, because many banks and credit unions are willing to make solar loans.

Mr. Ludwig contends that the solar business is more like the heating, ventilation and air-conditioner business, which is made up of local firms installing and servicing products made by national or global manufacturers.

“As a small business, you have to profit — you can’t go to the markets to get capital like the big companies can,” said Stephen Irvin, chief executive of Amicus Solar Collective, which helps Brooklyn SolarWorks and other small installers buy panels.

But Wall Street analysts contend that Sunrun and Sunnova’s ability to borrow lots of money should allow them to offer cheaper financing and potentially earn bigger profits.

“Size becomes a barrier to entry to others,” said Sophie Karp, an analyst at KeyBanc Capital Markets.

Wall Street analysts said the companies’ accounting could understate profitability. Like homeowners who buy solar panels, investors can gain tax advantages. Investors in Sunrun’s business, for instance, can use the losses there to reduce their tax bills. And when the losses borne by the investors are excluded, the company’s loss is much smaller.

Analysts also say Sunrun and Sunnova’s business will be profitable over time. They charge customers monthly to lease solar systems or buy the electricity that those systems generate. The idea is that over the life of a system — about 25 years — the companies will earn a lot more in monthly fees than they spend installing panels and batteries, which they tend to buy from factories in Asia.

“There is a good business here,” said Joseph Osha, an equity research analyst with JMP Securities. “The financials are tremendously complex.”

What is not in dispute is that interest in solar appears to be growing, partly because of forces unleashed by the pandemic.

As people have spent more time at home, some have realized that solar panels could help them reduce monthly energy costs while protecting them against blackouts. Recent wildfires in the West and a record hurricane season in the East have increased interest in solar and battery systems.

In addition, solar executives hope that President-elect Joseph R. Biden Jr. will push for an extension of subsidies like the federal tax credit that ends Dec. 31, 2023.

The Solar Energy Industries Association is pushing the incoming administration to provide the same benefit for residential solar as for larger scale solar, which would allow a continuing 10 percent tax credit after current subsidies expire. The association also wants a tax credit for energy storage.

Industry officials also argue that they are working hard to reduce expenses so they can break even sooner. Solar systems typically cost two or three times more in the United States than in other industrialized nations like Australia, partly because U.S. companies spend more time and money on securing building permits and on marketing.

The pandemic appears to have alleviated another big concern — that, in a recession, many solar customers would stop making payments. There has been no surge in defaults this year, probably because most homeowners who install panels are relatively well off and have not been hit hard.

“Now we have lived through one hell of a recession — and the payment performance was phenomenal,” said Mr. Berger, the Sunnova chief executive. “The market’s digesting this and going, ‘Wow, this is a lot less risky than we thought.’”

A year and a half ago, David Jacobs bought a solar system from Sunnova. Now entering his second full winter with the system, he’s relieved. He had been spending up to $800 a month on electricity in the winter, largely to run the heating system at his home in Niantic, Conn.

“I was getting these outrageous electric bills,” said Mr. Jacobs, a 75-year-old retired structural engineer. “I said this was unsustainable.”

Solar industry organizations like Rewiring America, a group of engineers, entrepreneurs and volunteers working to address climate change, estimate that the typical American household could save as much as $2,000 a year in energy costs by going solar.

Such savings, of course, would come at the expense of electric utilities, many of which have sought to slow or stop the growth of rooftop solar.

Utilities have said that residential solar systems primarily help affluent households that can afford to shell out tens of thousands of dollars on panels and batteries. As a result, the companies contend, middle-class and lower-income families are left bearing much of the cost of maintaining the electric grid.

The utility industry has been seeking to roll back state regulations and laws that allow homeowners to sell excess electricity from rooftop solar systems to the grid, including in California, the state that relies the most on solar panels. Sunrun, Sunnova and other solar companies are fighting to keep the policies in place. These battles could help determine if large solar installers can become profitable businesses.

India to give homegrown vaccine in seven more states this week