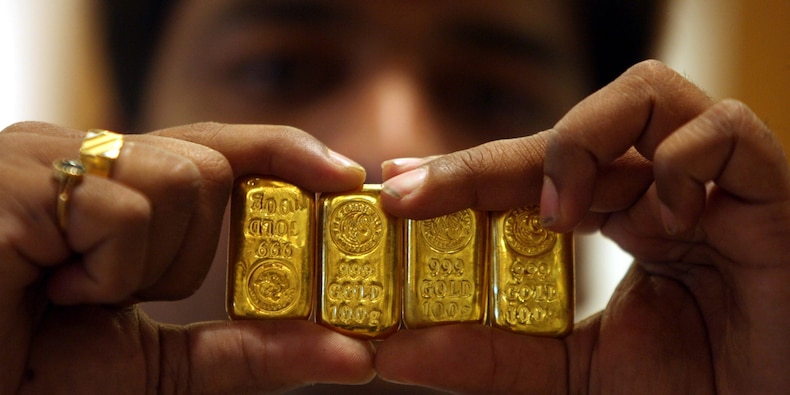 Gold prices Friday slumped to their lowest since mid-2020, under pressure as bond yields continued to spike while investors yanked money out of gold funds.

Gold prices fell as much as 3.4% to an intraday low of $1,714.90 an ounce on a continuous-contract basis and traded at levels not seen since early June 2020. For the week, the metal was on course to drop 3% and has lost roughly 9% so far this year.

There were outflows of $500 million from gold funds this week, according to Bank of America in its Flow Show update Friday. Gold funds logged the biggest weekly outflow since mid-November and their 16th in the past 20 weeks, according to fund tracker EPFR on Friday.

Gold’s been suffering at the hands of higher bond yields as well as gains for the US dollar. Yields on US government bonds have raced higher this week, making gold, which offers no yield, less attractive for investors to own.

The yield on the 10-year Treasury popped above 1.6% on Thursday, a sharp move from 1.3% in less than a week. Yields have climbed as investors sell off bonds in part as they price in inflation expectations on the view that the world’s largest economy will continue recovering from the recession brought on by the COVID-19 health crisis.

Dollar-denominated gold has also been weighed by a recent increase in the greenback’s value.

“The USD is bid as FX finally wakes up to what is happening in fixed income and equities around the world,” said Brad Bechtel, global head of FX at Jefferies, in a note Friday in which he pointed out a rise in the Bloomberg Dollar Spot index. That index rose 0.6% to 1,135 during Friday’s session, moving around its highest since early February.

While gold funds saw outflows, it was a “huge week” for inflows into equity funds of $46.2 billion, the third-largest ever weekly inflow, said BofA, adding that bond funds took in $7.1 billion.