Berlin (CNN)Germany reported its highest single day surge of Covid-19 infections as Chancellor Angela Merkel said the “dramatic” situation was the result of the fourth wave “hitting our country with full force.”

The Robert Koch Institute (RKI), Germany’s disease and control center, has reported 65,371 new cases within the last 24 hours — it is an increase of 12,545 new infections compared to the previous 24-hour period.
But these figures are likely to be under reported, and true scale of infections could be “twice or three times as many,” RKI chief Lothar Wieler told an online discussion with Saxony’s state premier Michael Kretschmer on Wednesday evening.

The country reported 264 Covid-19 related deaths from Wednesday to Thursday, pushing the total number of deaths since the pandemic began to 98,000 people in Germany, according to RKI data.

Germany has one of the lowest vaccination rates in western Europe, with just over 67% of the population fully vaccinated. Around 33% have no protection against the virus, according to the RKI.
This is one of the reasons why infections have soared to record levels, say experts, aided by waning immunity of the Covid-19 vaccines and the more infectious Delta variant.
“As the vaccination campaign started in Germany at the beginning of this year, we now see some age groups and some people lose their immunity against Covid-19 quickly,” Tobias Kurth, a professor of public health and epidemiology at the Charité university hospital in Berlin, told CNN.
”The current pandemic situation in Germany is dramatic, I can’t say it any other way,” outgoing Chancellor Merkel told mayors from across Germany on Wednesday.
Hospitalizations and deaths remain at a much lower level than in previous peaks, but there is growing concern about gaps in the country’s vaccination coverage as it moves into the winter months.
”It would be a disaster to act only when the intensive care units are full, because then it would be too late,” she added.

‘Lockdown for the unvaccinated’

The situation means Germany is on track to become the next country to impose stricter rules on those who haven’t been fully inoculated. Three parties making up the country’s prospective new coalition government approved a draft law on Thursday that would see stricter rules come into effect.
The measures — which will be debated in the upper house of parliament on Friday — would require Germans to wear face masks and provide proof of vaccination, a certificate of recovery, or a negative Covid-19 test in order to ride a bus or board a train, in an expansion of the country’s “3G” system that required a negative Covid-19 test to enter certain venues and settings. Free Covid-19 tests would be reintroduced as well as permission to work from home whenever possible.
The new legislation is designed to provide a nationwide framework in which the country’s regions can choose from a toolbox of other measures, depending on the severity of the outbreak. To that end, regions have room to tighten curbs in Covid-19 hotspots as needed.
Green Party co-leader Robert Habeck told public broadcaster ARD on Sunday that the rules in effect amount to a “lockdown for the unvaccinated.”
Merkel will also debate the implementation of stricter Covid-19 curbs with Germany’s leaders of the 16 federal states.
A country-wide lockdown might be the only option at this stage in Germany’s fourth wave, Kurth told CNN, as “we simply have too many Covid-19 infections every day.”
“Even if people are vaccinated, they can transmit the virus to others and we will continue to see a surge in cases. Unfortunately, we may need to think about going a step further and put in curbs for potentially the entire population,” he added.
Berlin has already imposed restrictions on unvaccinated people, where as of Monday proof of full vaccination or recovery from Covid-19 in the past six months is required for entry to bars, restaurants, cinemas and other entertainment venues.
But the current wave of infections is mainly affecting the southern and eastern parts of the nation, where vaccine uptake is lower. 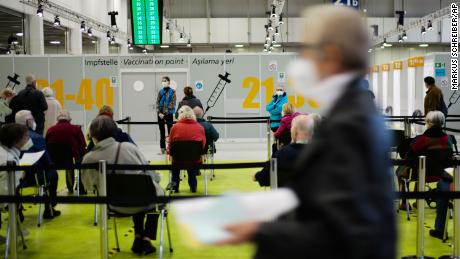 The pace of vaccinations have been picking up as officials call on the public to get immunized. “For the first time since August, over 500,000 citizens in Germany were vaccinated in one day yesterday,” Germany’s acting Health Minister Jens Spahn tweeted Thursday.
He said this included 381,560 booster vaccinations, “which are so important to break this 4th wave.”
Germany’s vaccine advisory committee recommended boosters for everyone over the age of 18 on Thursday as it attempts to address waning immunity from a two-dose regimen.
Despite the widescale availability of vaccines this winter compared to the last, Europe’s Delta-variant fueled fourth wave has made it the only region last week to see an increase in Covid-19 related deaths, the World Health Organization said Tuesday.
If the measures proposed by the coalition are agreed, they would move Germany closer in line with its southern neighbor Austria, where a lockdown specifically targeted at unvaccinated people came into force Monday. It bans unvaccinated people — more than a third of the country’s population — from leaving their homes except for a few specific reasons. 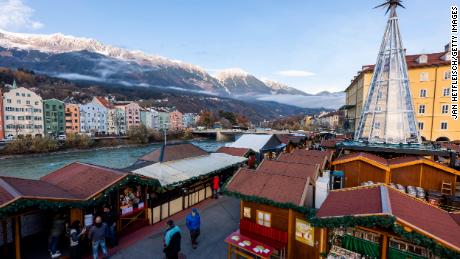 On Thursday, it was announced that the lockdown would be extended to the entire population living in the provinces of Salzburg and Upper Austria as ”new coronavirus infections continue to rise sharply,” Salzburg’s local government wrote on its website.
Austria, where vaccine uptake is lower than Germany, is suffering an intense wave of infections and reported a record 15,145 new daily on Thursday.
The country’s seven-day incidence rate also hit a record of 989 cases per 100,000 people.
By contrast, Spain and Portugal have avoided the brunt of the winter wave after posting the highest vaccination rates in Europe.
France, which has almost 75% of its total population vaccinated, is weathering the new infection spike better than its neighbors.

Nearly 5 million French have received their Covid booster vaccine shot, French government spokesperson Gabriel Attal said in an interview with French media LCI on Thursday.
“This is a lot. It puts us above most of our European neighbors, but it’s still too little,” Attal said. “We must continue.”
Source: Read Full Article