Home » Business » ‘For me whale meat is my childhood, my memories’

‘For me whale meat is my childhood, my memories’

As coronavirus devastates the travel industry, whalers in Norway are reaping the rewards of a national staycation.

“For me whale meat is my childhood, my memories,” says Frode Revke, as he sorts through a pile of white Norwegian cheese.

“Even my mother’s spaghetti bolognese was whale meat. The first time I went to Italy I was so disappointed, it tasted of nothing!”

Frode runs Ost & Sant, a deli selling traditional food in the heart of Oslo. In an average year the place is heaving with foreign visitors. But 2020 has been a little different.

“This year it’s been Norwegians who’ve come around,” he says. “People who can’t travel or go to restaurants are staying home to cook, and that’s changing what we sell.”

And what’s selling is whale meat. 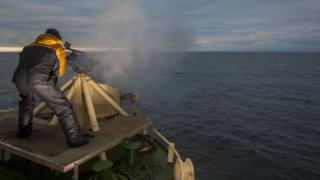 For the first time in years the industry is seeing a spike in demand. This summer, Norwegians who would usually have travelled to Italy and Spain have instead headed north to places in Norway like the Lofoten Islands.

There you’ll find sparkling fjords, jagged coastlines, and endless days of midnight sun. As well as a traditional type of food that’s illegal in most countries around the world.

By the mid-20th Century many species of whale had been driven close to extinction. And since the International Whaling Commission (IWC) announced a ban in 1986, only Norway, Iceland and Japan have continued the hunt on a large scale.

Aboriginal communities in Alaska, Canada, Greenland and Russia also catch small numbers of whales, as does the Caribbean nation of St Vincent the Grenadines.

Norway cites cultural reasons for flouting the 1986 ban, and maintains that – despite its reputation – whaling is a sustainable industry. In the words of Alessandro Astroza, a senior adviser at the Norwegian Ministry of Trade, the issue has become “emotional”.

He questions why whale meat is vilified above other sources of protein. After all, minke whales, the main species that Norway catches, are free range and not endangered, and the whaling industry produces none of the methane that the beef industry does.

But what does whale meat taste like? It is certainly distinctive. It’s traditionally served fresh or smoked, and many Norwegians use the same word to describe it – “tran”.

There’s no direct translation into English, but the closest you can get is “that cod liver oil taste”. Combine that with a beef-like consistency, and an incredibly salty hit, and you’ve got whale.

If you don’t think that sounds particularly appetising, you’re not alone.

Demand for the meat has been falling in Norway for years, and in 2019 the country saw its lowest annual catch in 20 years. A total of 429 minkes were killed, out of the more than 100,000 that live in the Norwegian and Barents seas.

This year, that number has jumped, with almost 500 killed. According to local whalers, demand has outstripped supply for the first time in half a decade.

But why has demand risen? Oyvind Haram, from the Norwegian Seafood Federation, says it is more than just the impact of coronavirus.

Instead he says that a campaign to make whale meat more attractive to foodies is paying off.

“To get attention you have to start early,” he says. “[Such as] working on social media in January, months before the whale season starts.”

For Oyvind whale is a distinctly local product that boasts low food miles, health benefits, and a sustainable and seasonable quota.

He’s spearheading a strategy that pushes this eco-friendly message to younger consumers along with fresh whale recipes.

Jonathan Romano is a former sushi chef who presents the Norwegian version of MasterChef. Growing up in a Filipino household, he didn’t eat whale meat as a child, and saw it as a relic of a bygone era. After meeting Oyvind at a whale food showcase his views changed.

“The problem is you’ve traditionally eaten whale as part of a stew with heavy, creamy gravy,” says Mr Romano. “The meat gets really tough with a strong metallic taste. Instead, you should eat it perfectly fried, seared with a raw middle point.”

He believes more chefs are likely to use it in the coming years.

Like many traditional industries, whaling relies on family ties – sons who follow their fathers onto the high seas.

More from the BBC’s series taking an international perspective on trade:

To encourage more people to go into whaling, the government has cut red tape around the industry. In what is a notoriously dangerous way to earn a living, it’s now easier than ever to launch your own boat.

This comes as the global fall in the price of oil this year has made it much harder to find work on Norway’s offshore rigs. The country has built its wealth on its vast crude reserves, but the oil industry has been badly affected.

So could 2020 signify the start of a long-term revival for Norway’s whaling sector? It is tough to say.

She points to a study that suggests only 4% of Norwegians eat whale on a regular basis, and thinks this is unlikely to change.

But Ole Myklebust says 2020 has been different. His company supplies more than 20% of the nation’s whale meat, and operates Norway’s only export route to Japan.

At the Myklebust factory on the remote island of Haroya, 100kg steaks are wheeled in on crates.

Knives the size of hockey sticks lean against the wall, and scraps of whale meat are turned into food for hungry sled dogs. Nothing is wasted.

He says he is selling more to Norway’s largest supermarket chain, and expects bigger contracts in 2021.

Back in Oslo, Frode Revke muses on the change in a deli frequented by hip young Norwegians.

“I’m selling cured whale tenderloin and warm smoked whale for making carpaccio,” he says. “But the whale sausage is the most popular.

“When I started selling it I thought, ‘this is just a fun thing, a curiosity.’ But within a few months it’s became the most popular product in the whole shop.”