WASHINGTON (Reuters) – U.S. job openings fell to a 1-1/2-year low in August and hiring declined, suggesting employment growth was slowing largely because of ebbing demand for labor as the economy loses momentum. 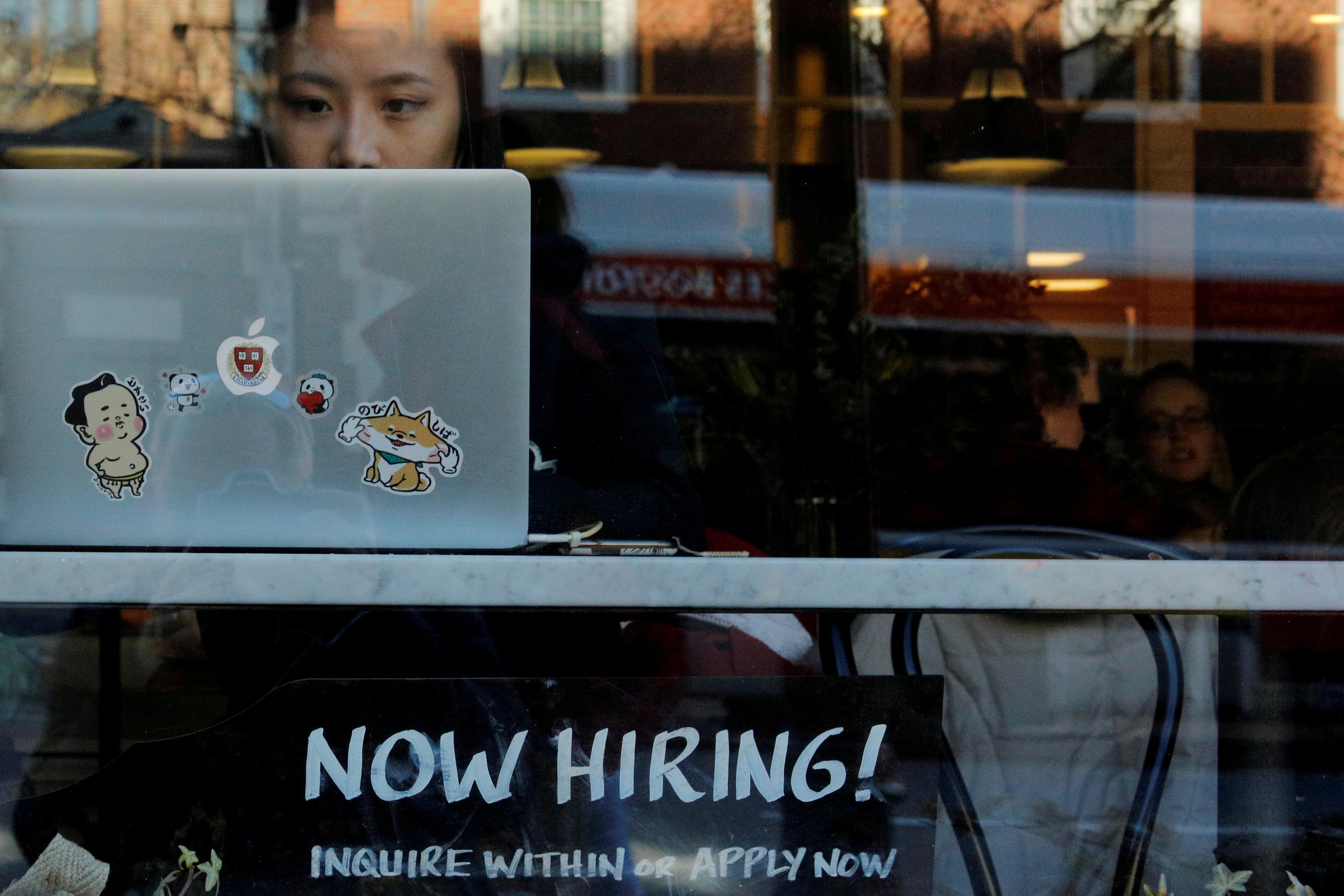 Despite the third straight monthly drop in vacancies reported by the Labor Department on Wednesday, job openings are still plenty enough to ease financial market fears of a looming recession. Job openings are being closely watched for signs of whether an erosion in business confidence, which has weighed on capital investment, is spilling over to hiring.

A 15-month trade war between the United States and China has hurt business confidence, leading to a retrenchment in business spending and downturn in manufacturing. The trade war has stoked financial market fears of a recession.

“The labor market is slipping a little, but it’s not flashing any recession signals yet,” said Chris Rupkey, chief economist at MUFG in New York. “You can’t have a recession with 7 million help wanted signs posted up in factory and store windows around the country.”

Job openings, a measure of labor demand, dropped by 123,000 to a seasonally adjusted 7.05 million in August, the lowest level since March 2018, the government said in its monthly Job Openings and Labor Turnover Survey, or JOLTS.

Job openings have been trending lower this year since scaling an all-time high of 7.63 million in late 2018. The job openings rate fell to 4.4% in August from 4.5% in July.

U.S. financial markets were little moved by the data.

The reduction in vacancies in August was led by manufacturing, with job openings in the nondurable goods industries falling by 49,000. Manufacturing, which the Trump administration has sought to boost with import tariffs, has ironically borne the brunt of the trade war.

The White House says the duties are necessary to protect manufacturing from what it says is unfair foreign competition.

There were 47,000 fewer job openings in the information sector in August. Economists said the JOLTS data would be closely monitored for clues as to when the longest economic expansion in history, now in its 11th year, might end.

“Although we only have data for the two prior recessions, on both occasions there was a decline in the job openings rate before the onset of recession,” said John Ryding, chief economist at RDQ Economics in New York.

“The job openings data bear close watching in the coming months to see if the softening in corporate demand for capex (capital expenditure) is beginning to spill over in the demand for labor.”

The decrease in hiring fits in with a declining trend in job growth. Nonfarm payrolls rose by 136,000 jobs in September, down from 168,000 in August, the government reported last Friday. The three-month average gain in private employment fell to 119,000, the smallest since July 2012, from 135,000 in August.

There were 1.17 unfilled jobs for every unemployed person in August. With the labor market slowing, the number of workers voluntarily quitting their jobs dropped to 142,000 to 3.5 million in August.

The quits rate fell to 2.3% from 2.4% in July. The quits rate is viewed by policymakers and economists as a measure of job market confidence. Layoffs were little changed in August, with the rate holding at 1.2%.

Slowing economic growth was underscored by a separate report from the Commerce Department on Wednesday showing wholesale inventories rose by a revised 0.2% in August. Stocks at wholesalers were previously estimated to have advanced 0.4%.

The inventory overhang has led businesses to place fewer orders at factories, contributing to the manufacturing slump.

“The current inventory glut spells problems for U.S. production and output growth over the next few quarters,” said Maria Cosma, an economist at Moody’s Analytics in West Chester, Pennsylvania. “As long as the inventory-to-sales ratio remains elevated, producers do not have the go-ahead to ramp up production.”

A slower pace of inventory accumulation in the second quarter contributed to holding back economic growth to a 2.0% annualized rate during the period. The economy grew at a 3.1% pace in the first quarter. Growth estimates for the third quarter range from as low as a 1.5% annualized rate to as high as a 2.0% pace.