Dogecoin is a joke cryptocurrency which has risen by more than 9,000 percent in 2021 alone. On Friday, the price of this digital coin almost doubled in a single day. Currently, the cryptocurrency’s all-time high is £0.32 ($0.45) which its highest figure in the past 24 hours almost reaching this figure at £0.31 ($0.43).

Tesla boss Elon Musk has been an advocate for Dogecoin, and earlier this year, tweeted about the digital token, sending its price up by 25 percent. 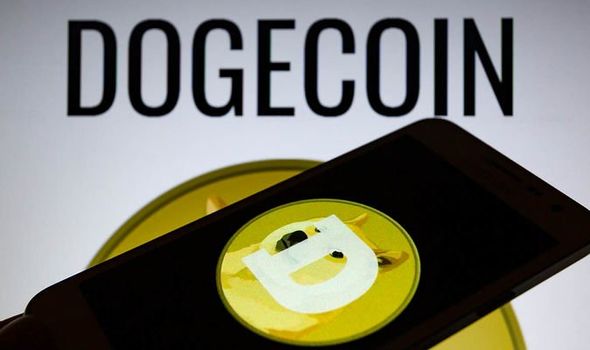 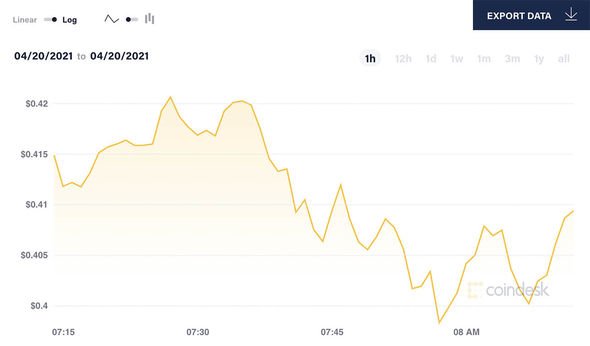 Dogecoin jumped by more than a fifth as fans online pushed to send the digital token to record highs on “DogeDay”.

The spike has been driven by enthusiastic traders of the digital coin who hope to see the price rise to £0.71 ($1) on April 20, a day they would see named DogeDay.

One social media user wrote: “Ladies and gentlemen we are lifting off #DogeDay #DogeDay420”.

Another added: “Humans can manifest anything; try to get all your friends to buy some #Dogecoin tomorrow during your smoke sesh #DogeDay #doge”.

One person tweeted: “Now is the time to buy and hold past $5 let’s show everybody what this community is really about and take that #1 spot away from bitcoin #dogeday.” 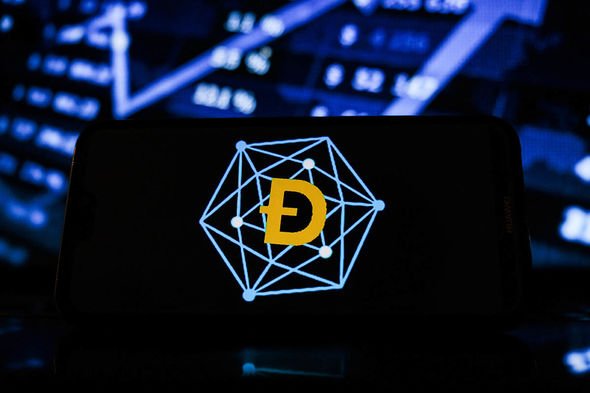 Will dogecoin continue to rise?

Jesse Acosta, founder of TheDayTraderChatroom.com told Express.co.uk: “I think Dogecoin could push towards the £0.54 ($0.75) area in the best case scenario this year if the buying volume stays strong.

“By buying volume, I mean a lot more investors buying into it.

“As it climbs, people will take profits, but as long as there are more buyers than there are sellers the price will continue to push on up.”

He believes the future trends of dogecoin are mainly dependent on the “hype of social media”.

The cryptocurrency expert added: “As long as this hype stays strong and buying volume is big on the way up.

“It could continue its upward trend, but I do expect a significant pullback before it makes that attempt.

“I do think the upward trend will continue as long as the social media hype stays strong.

“Remember this is a meme coin. As long as people keep hyping it on social media, more new buyers will come in.”

DON’T MISS
Dogecoin price live: What is the current price? Should you invest? [INSIGHT]
How to buy Dogecoin [EXPLAINER]
Dogecoin price: How high will Dogecoin go? [ANALYSIS] 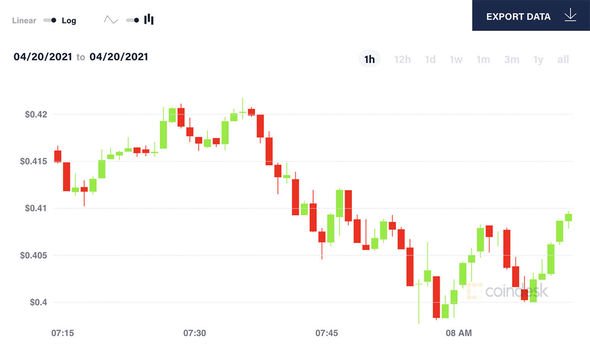 Seek Capital CEO Roy Ferman said experts are split on whether the currency bubble will soon burst or if it is just the beginning of the dogecoin climb.

“Although dogecoin is currently the cheapest cryptocurrency around, it’s proven to be an opportune investment.

“That being said, it is fairly challenging for experts to accurately predict the future price point of this new cryptocurrency because of the varying effects of its budding social media interest and influence.

“Bitcoin’s rise to fame and fortune has helped the younger generation acclimate to crypto investments.

“Some experts believe this newfound hype surrounding digital currency will dissipate soon while others believe this is only the beginning.

“Dogecoin has seen a more than 6,900% increase in this year alone.

“If this trend continues to thrive, it’s perhaps safe to say dogecoin can reach the unimaginable heights Bitcoin is currently soaring at.

“Of course, there is no way to foresee the future of this cryptocurrency, but the record shows, early BTC investors struck a gold mine before they even knew it; the same outcome is an extremely probable fate for dogecoin.” 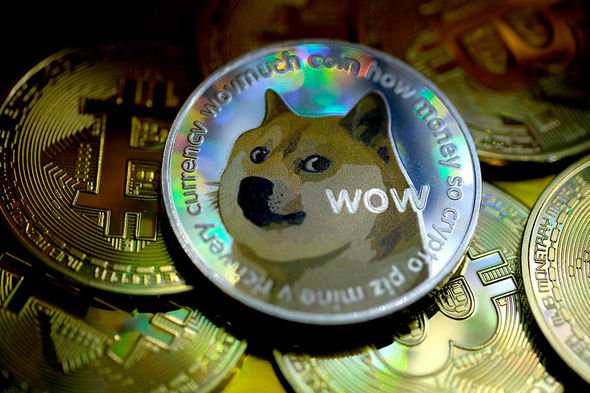 Mohit Tater, CEO of Black Book Investments, and Bitcoin, and NFT expert, believes it is difficult to predict dogecoin enthusiasts will see the currency reach the £7.14 ($10) mark.

He told Express.co.uk: “Dogecoin’s price spike is staggering: especially considering that this cryptocurrency was initially created as an internet joke.

“The $1 mark is currently being set as a sort of ‘goal’ as fans and holders of the cryptocurrency hope to reach it before the end of 2021.

“It’s likely that this goal will be met, considering the upward trend, but difficult to predict if it can be sustained post that event

“For dogecoin enthusiasts who have set their hearts upon the £7.14 ($10) mark: it’s difficult to say they won’t be disappointed.”

Mr Tater added the trends of Bitcoin and those disgruntled about not investing in the digital coin years ago are jumping on the dogecoin bandwagon now.

He said: “Dogecoin’s reputation precedes itself: as the latest get-rich-quick opportunity, it rises because of the masses of people clamouring to have a piece of the cake.

“As the popularity of Dogecoin only increases, so will the investments: particularly from scores of people who regret not investing in Bitcoin years ago.

“However, for Dogecoin to continue rising in the way other cryptocurrencies have, it will need its investors to have faith and sit tight for a couple of years.”

He added today (DogeDay) could mark a change in the pattern of the cryptocurrency.

Mr Tater said: “It’s likely that upon hitting the $1 mark, a large portion of holders will cash in, causing a subsequent plummet.

“Market research has consistently shown that the rises and falls are inevitable as the price of cryptocurrencies becomes cyclical.

“Dogecoin will need to suffer a few falls before it can reach a significant price (such as the $10 mark), which will plausibly take a few years.”

Crypto investor and CPA Exam Guy owner Bryce Welker does not believe the coin will reach its DogeDay target.

Mr Welker added the cryptocurrency is currently dependent on endorsement from important figures such as Elon Musk.

He said: “Dogecoin is what people typically refer to as a ‘meme’ coin (i.e. an ‘unserious coin’) since there is a technically infinite supply of them.

“What will continue to impact the price of Dogecoin, first and foremost, will be the continued support from people like Elon Musk and its pop-cultural value thanks to places like Reddit.

“The continued upward trajectory of cryptocurrencies in general and sustained retail investor interest in alternative coins, thanks to the now prohibitively expensive price of Bitcoin, will also impact Doge.

“I think the price of Dogecoin will continue to increase in tandem with the rest of the cryptocurrency market, but not because of any solid fundamentals, but simply because it will continue to enjoy the self-perpetuating fame of already being famous.

“I think Doge ultimately exists to be pumped and dumped by insiders and market makers and it will eventually peter out as the more substantive coins continue to receive legitimate institutional interest and mainstream media coverage.”

Ethan Taub, CEO of Loanry, said he does not believe dogecoin will have the continued stratospheric rise some cryptocurrency experts predict.

Mr Taub said: “Although the evidence seems to indicate otherwise, I don’t think that dogecoin will take off as much as people think.

“It crept to the top because it wasn’t taken seriously and considered “meme currency”, but now that people see it as legitimate, more people will be mining for it which would drive the market down significantly.

“This is likely to impact its potential heights.

“I think that the price could almost double in the coming weeks but then we will see it fall massively very shortly after.

“If everyone is mining for it, no one will be looking to buy, only sell.”

Crypto Head spokesman James Page said the digital coin could surge and even triple its current price depending on ongoing trends.

Mr Page told Express.co.uk: “If dogecoin can become the people’s currency, everything is a possibility in the Crypto Market.

“Thus the only thing sure is that dogecoin will rise should traders continue to patronise and buy it.

“Given how long term investment dogecoin is, this is not difficult to follow.

“What’s harder to predict here, is how much it will surge up to the market once more people start to pay attention to it.

“But presumingly, it can double or triple in value, or may go higher depending on the trend and financial market.”