When one thinks of underserved communities in Los Angeles, one does not think of Malibu. But, according to L.A. County Department of Public Health numbers, the beachside enclave’s Covid-19 vaccination rate ranks right between those of Montebello and Pico Rivera.

So while state and county health officials have worked diligently to vaccinate underserved communities and those in the region’s lowest economic quartile, one of the county’s most affluent locales has also lagged behind.

Asked about those discrepancies last week, L.A. County’s Chief Science Officer Dr. Paul Simon said, “Malibu is one example that surprised me a bit.” Generally areas with higher average income levels have higher vaccination rates, according to Simon. He shared a map (above) that proved his point.

The map shows vaccination rates is shades of green, lighter for a lower rate and darker for a higher rate. While nearly all of West L.A. is the darkest shade of green, a vast swath of Malibu stretches to the left of the map in much lighter tone.

Another map he shared shows the discrepancy also holds true among Malibu’s seniors. 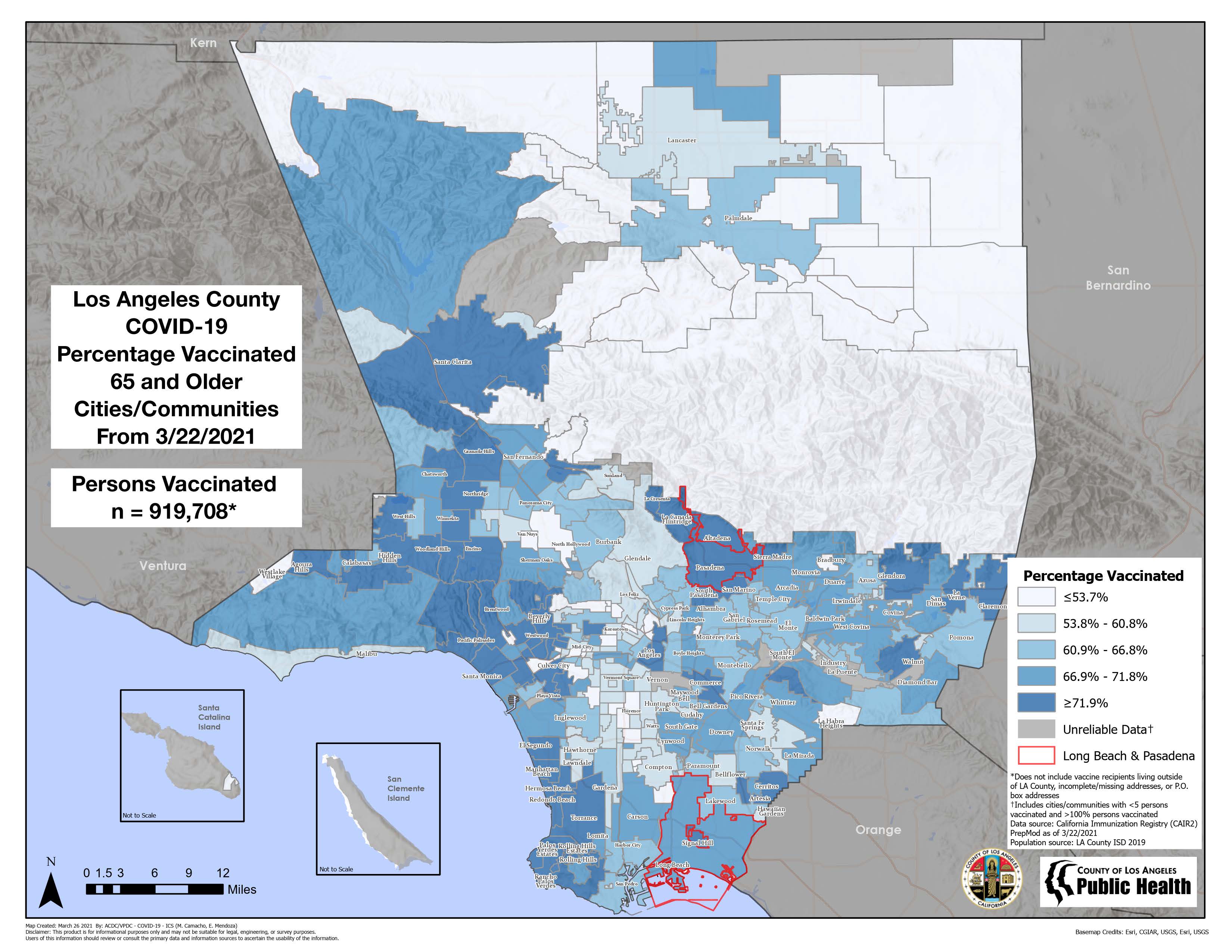 Malibu, of course, has a history of vaccine hesitancy. That could be some of what’s at play here.

In 2014, an L.A. Times analysis of data revealed that, while personal belief exemptions for vaccination of kindergartners in L.A. Unified ran at just 1.4%, in the Santa Monica-Malibu district the overall exemption rate was 10 times greater, at 14.8%.

Personal belief exemptions were eliminated in 2016, after which medical exemptions for vaccination spiked in Santa Monica-Malibu district kindergartens, according to EdSource.org. In January 2020, a new law restricted those, as well.

Another factor may be distance.

“I have had some conversations with some folks in Malibu,” said Dr. Simon. Lower vaccination rates there, he speculated, “may reflect some geographic isolation and some [vaccine] hesitancy among families with children.”

While there was a one-day clinic for residents on Thursday at Pepperdine and another scheduled for city hall on the 13th, there are fewer regular opportunities to get vaccinated in Malibu. The local CVS is administering shots and Malibu Urgent Care provides them, but there are no super sites nearby with large numbers of vaccines.

In fact the two clinics mentioned above reportedly had just 500 doses between them which, if they weren’t the one-shot Johnson & Johnson variety, would be enough for just 250 people.

Asked about factors driving the low vaccination rates, City of Malibu Media Information Officer Matt Myerhoff said he suspects “the lack of large vaccination sites within close driving distance that can handle thousands of people per day. There are no large hospitals, sports stadiums or similar places in Malibu.”

Myerhoff also pointed to the area’s low population density compared to say Beverly Hills or Brentwood as another reason its residents might not feel compelled to get vaccinated.

Along those lines, the city’s infection rate is exceedingly low. There have only been 351 cases in Malibu to date, which doesn’t rank it anywhere near the top 25 locales in cases per 100,000 in the past 14 days. But Brentwood is on that list at No. 8. So is Beverly Hills, at No. 18.

There could yet be a mass vaccination site in Malibu at some point.

According to the city’s web site:

The City of Malibu is in active conversations with local medical providers to prepare for and support a mass vaccination site. Whether a site is needed depends on how many doses the local medical providers receive. If they only receive a small number of doses that is manageable to administer in their offices, then that is how it will be done. However, if the number of doses is too large to effectively administer through their offices, then a mass vaccination site would be established. City Council has already approved using City Hall as a vaccination site, and City Hall has been used numerous for drive-through COVID-19 testing service.