The FTSE 100 and the pound have come under renewed pressure as investors eye the prospect of tougher coronavirus restrictions returning across the UK and much of Europe.

Market analysts pointed to a string of value negative developments driving the FTSE lower as it plunged by 3% within the first couple of hours of trading on Monday – dipping further as government advisers warned strict measures would be needed to curb surging UK infection rates.

It was trading 216 points – or 3.6% lower – at 5,791 by 11.20am as companies exposed to any new COVID-19 restrictions, including travel firms and housebuilders, saw their stocks face a renewed run from risk. 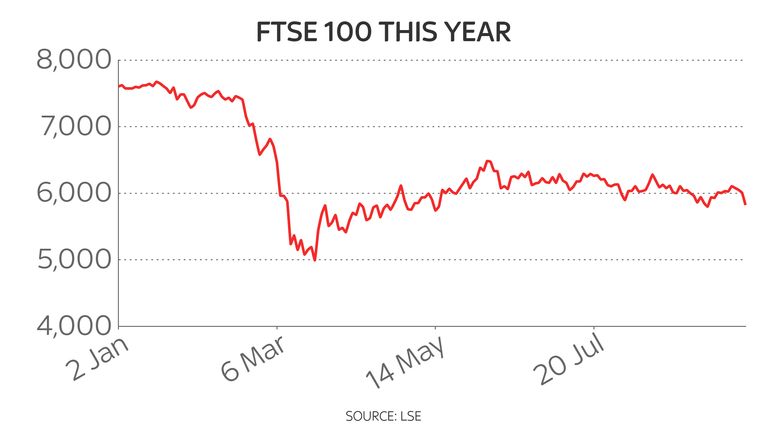 The intraday low left the index more than 23% down on the year to date but 14% up on its pandemic low in March.

British Airways’ owner IAG was the biggest faller on Monday, down by 14%, leaving its shares 77% lower on where they started 2020.

Among the other losers were banks – hit by the publication of a report alleging that a number of global lenders had moved large sums of illicit funds over nearly two decades despite concerns over the money’s origin.

The money laundering claims, which extended to UK-listed HSBC and Standard Chartered, led to falls of more than 3% in their respective share prices taking HSBC’s market value to a 25-year low.

Another company to take a hit was Rolls-Royce which said on Monday morning it was looking to raise up to £2.5bn to strengthen its balance sheet.

The prospect of a rights issue helped take its shares more than 10% lower.

Away from the FTSE 100, shares in the hospitality sector took a bad turn with Wagamama-owner The Restaurant Group, falling over 18% at one stage.

Other casualties feeling the hangover included JD Wetherspoon – down 10% – while the company behind Harvester and Toby Carvery, Mitchells & Butlers, saw its shares lose 14%.

It was a similar story for equities across Europe after Asia started the week on the back foot.

The German DAX and CAC in Paris were more than 2.5% lower.

In the case of the pound, analysts pointed to fresh pressure from lockdown risks to the UK economy, as it lost 0.5% to the dollar to trade at $1.2844. 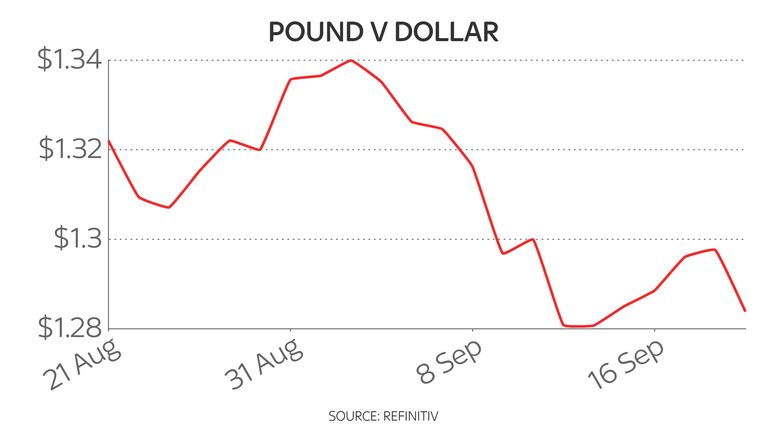 The currency – a barometer of the state of Brexit talks since the vote to leave the EU in 2016 – has already faced weeks of hardship as a result of the difficulties in trade negotiations.

Investors are demanding a deal to follow the Brexit transition period on 1 January.

Neil Wilson, chief market analyst at Markets.com, said the stock market falls were building on the “September blues” of the past few weeks that have seen the gloss removed from US tech stocks.

“European markets shot lower in early trade on Monday after US stocks fell for a third week in a row – the first such sustained decline in a year.

He said of the virus link to the declines: “Tighter rules are almost certain as the authorities flounder and seem unable to get any kind of consistently clear approach to the pandemic.

“Travel and leisure was hit hard as new lockdowns and travel restrictions are an almost given heading into half term.”