Home » Business » Consumer prices rose at the fastest pace since 1982

Consumer prices rose at the fastest pace since 1982

Restaurant prices spiked 5.8% over the 12 months ending in November without seasonal adjustments, the Bureau of Labor Statistics said Friday. That’s the largest 12-month increase since the year ended January 1982.
And unfortunately for those hoping to curb spending by turning to home cooking, grocery prices are also at record highs: They jumped 6.4%, the largest 12-month increase since December 2008. Beef had the most dramatic increase with a 20.9% spike in prices. 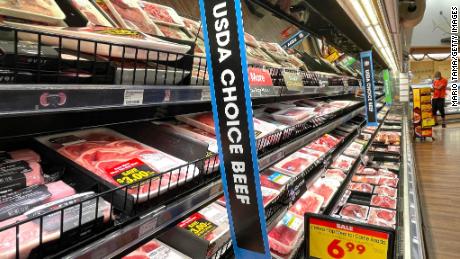 The sharp increases underscore the fact that restaurants and food makers are not immune to supply chain and labor pressures contributing to pricing increases across the board.

Yet they’ve found customers are willing to spend more. In fact, restaurants have been raising prices as their own food and labor costs rise, and so far, they say, consumers have accepted the hikes.

McDonald’s (MCD) said in October that it expects menu prices to be about 6% higher this year compared to last. The increase “has been pretty well received by customers,” CEO Chris Kempczinski said during an October analyst call. Chipotle also raised prices this year, yet it has seen its same-store restaurant sales grow.
Beyond restaurants, food manufacturers and grocers have faced higher costs for commodities, labor and transportation. Those costs have escalated further in recent months, leading manufacturers to pass some of them on to their retail customers — who in turn charge consumers a portion of those increases.
Higher prices at the grocery store will likely stick around into next year. Major manufacturers like Kraft Heinz (KHC) and Mondelez (MDLZ) have said that they plan to hike prices for their retail customers in early 2022.
That’s all allowed companies to pull back on or eliminate discounts, because demand is strong and they don’t want to run out of their limited supplies.

What got more expensive in November

While some food prices stayed flat or even fell from October to November, other items got more expensive in the period, according to the consumer price index.
Lettuce prices climbed 6.9% and fresh fruit went up 2.2% on a seasonally adjusted basis. Oranges, including tangerines, rose 2.4%. At the opposite end of the spectrum, treats like fresh coffeecakes and donuts jumped 3.5% in price.
Meat prices also continued to tick up: Pork prices grew 2.2%, with breakfast sausages up 2.7% and hot dogs 2.8%. Pork roasts, steaks and ribs rose 3.7%.
Some of these items could get even pricier. Hot dog, sausage and burger makers have warned retailers that they plan to increase prices for some frozen and refrigerated meats in January.

The hikes in food are part of a trend of increasing prices overall. Consumer price inflation, which includes gas prices and other categories, rose by 6.8% in the 12-month period ending in November, hitting its highest level in 39 years.
— CNN Business’ Nathaniel Meyersohn and Anneken Tappe contributed to this report.
Source: Read Full Article