Once again, Cardi B and Megan Thee Stallion’s explicit song “WAP” has everyone talking.

During the Grammy Awards on Sunday night, the two rappers performed their hit single, which famously made waves on social media after it dropped in August for its provocative lyrics.

Grammys host Trevor Noah prepped the audience ahead of the performance, advising, “If you have small children in the room, just tell them it’s a song about giving a cat a bath.”

Donning a neon purple two-piece, Cardi B kicked off the song by dancing against a pole, fashioned as the stiletto of a giant high heel, before being joined by a group of backup dancers. 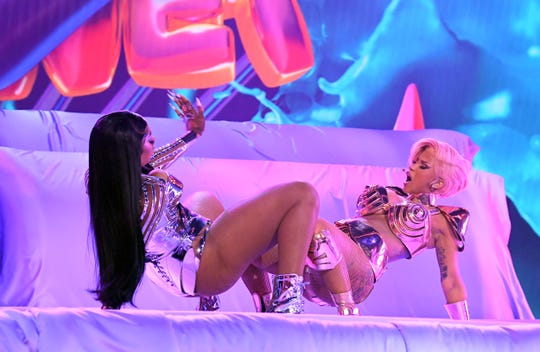 Cardi B and her fellow rapper, Megan Thee Stallion, bring "WAP" to the Grammys stage. (Photo: Kevin Winter/Getty Images for The Recording Academy)

Megan Thee Stallion then hit the stage for her verse in a tight purple one-piece. The two rappers later appeared on a massive bed, crawling and intertwining their legs as they danced together.

Grammys 2021: Brutally honest reviews of every performance, including ‘WAP’ and ‘Dynamite’

The performance earned praise from fans on Twitter, while others argued it was inappropriate.

“ok best performance goes to meg and cardi and it not even done yet this (expletive) crazy,” wroteRebecca Black.