California’s New Covid Cases Roar Past 4,000 For First Time Since February; Positive Tests Up Over 30% In Past Week, Now Higher Than Overall U.S. Test Rate

“In two weeks, we can end this pandemic in the United States of America,” said an upbeat Governor Gavin Newsom at a news conference on Monday. That California is “roaring back” has become Newsom’s mantra as he announces programs funded by the state’s record budget surplus. Ironically, nowhere was that assertion more true on Monday than in the state’s skyrocketing Covid-19 numbers.

The state has stopped announcing Covid numbers on the weekends, instead issuing one big number on Monday. Today, that three-day total was 14,097, which breaks down to an average of 4,667 new cases per day. The last time daily case numbers were that high in the state was February 22 of this year during the winter surge. Test numbers are way down since February, however, which means a greater number of new cases may be going undetected. Also, case numbers are usually lower over the weekend and on Mondays because fewer people get tested on weekends. That does not bode well for the coming week.

Likewise, the state’s 7-day average test positivity hit 4.1% on Monday. According to the state dashboard, that’s up 1.1% in just the past 7 days, which is a 37% rise week-over-week. It’s also higher than the overall U.S. test positivity rate, which say at 3.77% on Monday, according to Johns Hopkins University. The CA number is especially concerning because, unlike raw case numbers, it is an average and it accounts for the rise and fall in testing. The test positivity rate, which hit a low of 0.7% on June 5

The graph of test positivity over time tells the story as well, going nearly vertical in the past two weeks — see chart below. 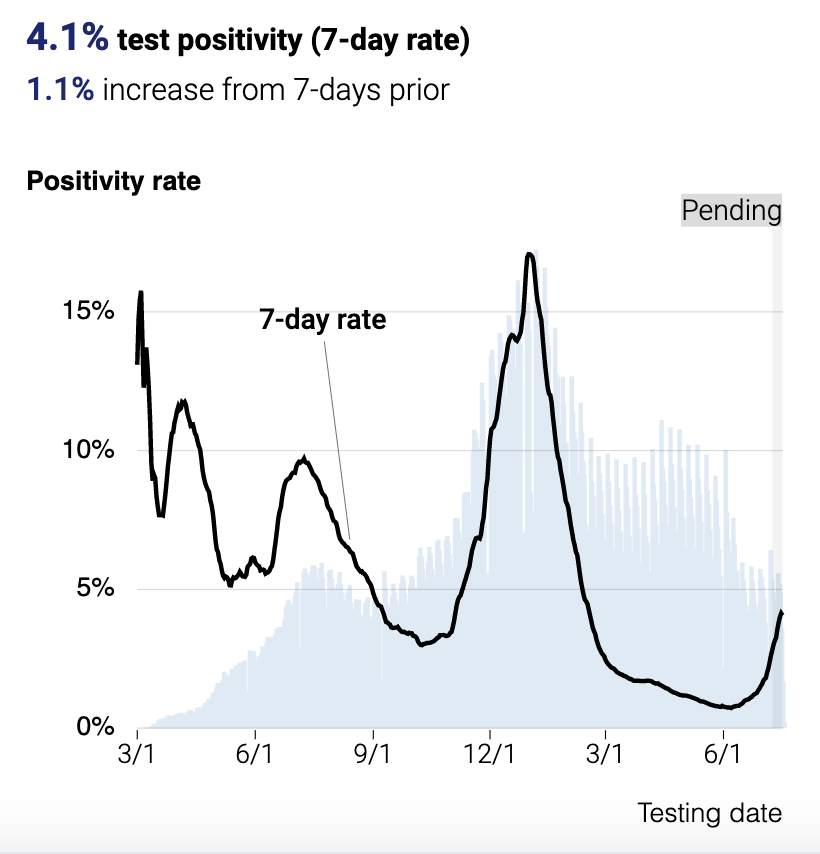 Another trusted sign of community spread is cases per 100,000. On Monday, the state was at 6.9 cases per 100,000. Before Newsom reopened the state on June 15, that number would have put the state as a whole in the Red or “Substantial” spread tier of the governor’s Blueprint for a Safer Economy. See chart below.

Due to the rising numbers, the state’s largest metropolis reinstated an indoor public mask mandate on Saturday for all residents, no matter their vaccination status. Asked specifically about any plans at the state level to impose new restrictions Newsom — who is facing a recall election in September — said, “We are committed to addressing this latest increase in new cases in the state of CA.” He then went on to talk about the local county initiatives — which last week reimposed about half of the state’s population to wear masks again in public — before encouraging everyone to get vaccinated.

“We can get it done in a matter of weeks, if not months,” said Newsom. “If you want this to end, get vaccinated.”

“We have an opportunity to not have to deal with these mandates or recommendations,” he said.