Washington (CNN)President Joe Biden on Thursday unveiled harsh new sanctions on Russia meant to punish the country for its full-scale invasion of Ukraine, calling out Russian President Vladimir Putin for his aggression even as he acknowledged it would take time for the new measures to alter Putin’s behavior.

“Putin is the aggressor. Putin chose this war. And now he and his country will bear the consequences,” Biden said, laying out a set of measures that will “impose severe cost on the Russian economy, both immediately and over time.”
The new sanctions include export blocks on technology, a centerpiece of Biden’s approach that he said would severely limit Russia’s ability to advance its military and aerospace sector. He also applied sanctions on Russian banks and “corrupt billionaires” and their families who are close to the Kremlin. 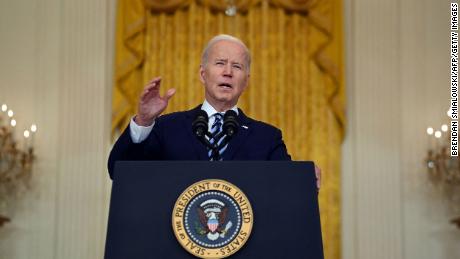 Biden insisted his threat to directly sanction Putin remains “on the table” and is “not a bluff,” but he didn’t answer when asked why he hasn’t directly sanctioned the Russian president yet.

“The threat of the sanctions … imposing the sanctions and seeing the effect of the sanctions are two different things,” Biden said. “He’s going to begin to see the effect of the sanctions.”
“It’s going to take time,” Biden said of the effects of the sanctions. “We have to show resolve so he knows what is coming. And so the people of Russia know what he’s brought on them. That’s what this is all about.”
The new sanctions targets are not limited to Russia. The US also went after individuals in Belarus, including the country’s defense minister, for that country’s role in facilitating the Russian attack.
And Biden announced a new deployment of ground and air forces to NATO’s eastern flank, even as he reiterated US troops would not engage in direct conflict in Ukraine.
“Our forces are not and will not be engaged in the conflict,” he said, addressing the nation from the White House East Room in his first appearance in public since the Russian attack commenced late Wednesday. “Our forces are not going to Europe to fight in Ukraine but defend our NATO allies and reassure those allies in the east.”
The President later briefed the top four Congressional leaders on the situation in Ukraine, Senate Minority Leader Mitch McConnell said at a press conference in Kentucky. 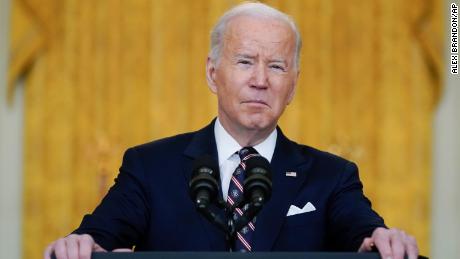 In his public remarks, Biden cast Russia’s invasion of its neighbor as a generational moment that has the potential to upend global order.
“Putin’s actions betray a sinister vision for the future of our world, one where nations take what they want by force,” he said.
He declared the Russian president’s actions would “end up costing Russia dearly, economically and strategically.”
The new sanctions, the latest US reprisals against Moscow this week, had been reserved as Biden hoped to maintain some leverage in dissuading Putin from a full-scale invasion. But so far, Western threats of economic punishment, as well as Biden’s strategy of revealing what the US knew about Putin’s buildup of forces to try to make the Russian leader second-guess himself, have proven ineffective.
After months of predictions and warnings, Russian forces began their attack on Ukraine Thursday morning local time, with reports of troops crossing the border to the north and south, explosions in multiple cities including the capital Kyiv, and warnings from Putin of future bloodshed unless Ukrainian forces lay down their arms.
Biden’s sanctions are now meant to punish Putin’s actions, rather than prevent them, by going after Russia’s economy, its military capabilities and those closest to the Russian president. How much they can alter Putin’s decision-making going forward, however, remains an open question. 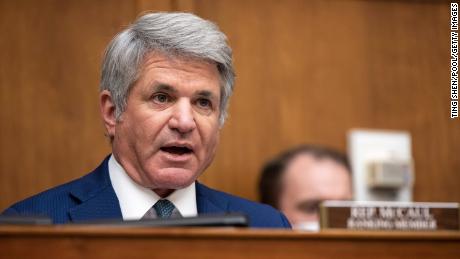 Deputy national security adviser Daleep Singh defended the current level of sanctions at a White House briefing later on Thursday, calling them “the most consequential ever levied on Russia and arguably the most consequential ever levied in history.”
Pressed on Biden’s comments earlier in the day that “no one expected the sanctions to prevent anything from happening,” Singh said the administration didn’t want to act preemptively on sanctions to keep Putin from seeing action as a “sunk cost,” or using it as rational to downplay diplomacy.
White House press secretary Jen Psaki later attempted to clarify the President’s comment, reiterating his suggestion that the threat of sanctions and their effect are two different things. “We do see them as having a deterrent impact, right? It doesn’t mean they’re 100% foolproof,” she said.
Mindful of rising gas prices in the United States, Biden also said in his sanctions announcement that he was working to limit the fallout the new sanctions would have on energy prices. He said the US was ready to release barrels from the Strategic Petroleum Reserve alongside its allies.
“I know this is hard and that Americans are already hurting,” he said. “I’ll do everything in my power to limit the pain the American people are feeling at the gas pump.”
Biden also insisted that he hadn’t underestimated Putin, saying that “he has much larger ambitions than Ukraine. He wants to, in fact, reestablish the former Soviet Union. That’s what this is about.”
“I think that his ambitions are completely contrary to the place where the rest of the world has arrived,” the President added.
Psaki also told reporters that the US is ready to accept Ukrainian refugees and that the US expects “that most, if not the majority, will want to go to Europe and neighboring countries.”
The US has “been talking and engaging with Europeans about” the prospect of refugees “for some time,” Psaki said, noting that the US is “working with European countries on what the needs are, where there is capacity.”
During a swearing in ceremony at the White House on Thursday, Vice President Kamala Harris called Russia’s actions in Ukraine “unprovoked” and “unjustified.”

“All eyes around our country and the world are on Ukraine — and Russia’s invasion of Ukraine. And I want to be clear that we know and believe that this is a war of choice,” the vice president said.
Before Biden’s announcement about new sanctions, he conferred with the leaders from the Group of 7 industrialized nations about which sanctions they planned to impose, hoping to coordinate a response that projects unity among Western allies. US and European officials spoke by phone overnight into Thursday to coordinate their responses.
In a joint statement following the virtual meeting, the leaders of the G7 said Putin has “re-introduced war to the European continent.”
“He has put himself on the wrong side of history,” the leaders wrote.
On Thursday morning, EU Commission President Ursula von der Leyen promised to “weaken Russia’s economic base and its capacity to modernize” following the “barbaric attack” by Russia against Ukraine.
“We will freeze Russian assets in the European Union and stop the access of Russian banks to European financial markets,” she said.
Biden also convened a meeting of his National Security Council on Thursday morning to discuss the situation in Ukraine, a White House official said.
Biden’s top national security aides convened emergency meetings late Wednesday as Putin announced his plan to launch a “military operation” against Ukraine in a televised address. The speech was aired in Russia at the same time the United Nations Security Council was convening to condemn Moscow’s behavior, catching some delegates off-guard. 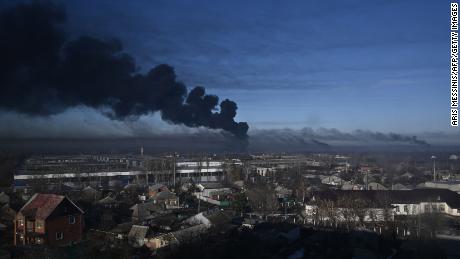 Huddled in the West Wing, Biden’s national security adviser, Jake Sullivan, and other top officials prepared a statement from Biden condemning Russia’s attack as “unprovoked and unjustified.”
“President Putin has chosen a premeditated war that will bring a catastrophic loss of life and human suffering,” Biden wrote in the statement, issued at 10:25 p.m. ET just as explosions began in Kyiv.
An hour later, Biden was on the phone with Zelensky, who reached out to the White House as his country was coming under siege.
“He asked me to call on the leaders of the world to speak out clearly against President Putin’s flagrant aggression, and to stand with the people of Ukraine,” Biden said afterward in a statement. He said the US and its partners planned on “imposing severe sanctions on Russia.”