As the monumental task weighed upon him, and expectations and questions swirled about at an overwhelming rate, Nick Foles put pen to paper, and the words flowed.

It was the only way he could process the sudden shift in his role with the Philadelphia Eagles. Franchise quarterback Carson Wentz sustained a season-ending knee injury amidst an apparent 2017 playoff run. Foles, the backup, was suddenly charged with keeping the offense and the franchise afloat. An entire organization and its long-suffering fan base needed him to deliver in a way he never had during his NFL career.

ALL WRONG: NFL gets it wrong again by not disciplining Tyreek Hill 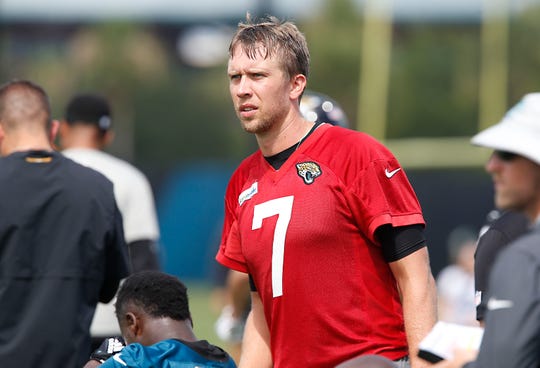 By the end of the writing session, the stressful anguish had started to subside, and Foles went to work.

You know how the story ends. Foles became the unlikely hero – Super Bowl MVP after helping lead the Eagles on a march to the playoffs, a charge to the Super Bowl and the first Lombardi Trophy in franchise history. He displayed poise, a knack for making plays – with his arm, his legs and even his hands.

According to Foles, none of that would have happened if not for his determination to ground himself in his faith, family and strict mental and physical health regiments.

Seventeen months have passed since the Eagles’ improbable Super Bowl run. Now Foles, an eighth-year veteran, again finds himself in pressure-packed territory. In March, he signed a four-year, $88-million contract with the Jacksonville Jaguars. They expect him to infuse an anemic offense with explosiveness to complement a formidable defense and to lead them to a Super Bowl of their own.

He experienced the usual mental challenges associated with trying to acclimate himself to a new organization, coaches and teammates and a new city. But he has worked to maintain the same personal disciplines. He sees them as the key to ensuring continued success in this new chapter of his career.

“You can ask anyone in this game. You know when it’s about two weeks before training camp. Your body just knows,” Foles told said in a telephone interview with USA TODAY Sports while working with Bulletproof to promote the brand’s products. “It’s just a little different day by day. You notice it when you’re trying to go to sleep at night. You can just feel it approaching, because training camp is training camp. It’s not the easiest thing, but it’s a time where you can get in some really good work.”

For the quarterback, daily growth starts with his focus on his dietary and spiritual intake. Then, he progresses to football.

He begins each morning with a cup of Bulletproof coffee – a high-calorie drink that’s part of Dave Asprey’s Bulletproof diet, which features a recipe containing Brain Octane Oil, grass-fed ghee, collagen protein powder and an energy supplement that provides a boost without caffeine jitters.

Foles first learned of the coffee, brewed from beans tested to ensure they contain no mold or toxins, from a family friend five years ago.

“I tried it, and I felt amazing. I started reading Dave Asprey's books – his knowledge of the bulletproof diet, his knowledge of 10 to 15 years of his life, and I started implementing those things in my life. I started noticing a difference in my training,” said Foles. “I wasn’t having these sugar cravings or crashes, quite honestly.”

Foles continued, “My diet, and the coffee – I’m a firm believer that if you’re putting the right things in your body and you take care of it, then you’re going to be more resilient and able to handle all kinds of situations. Everyone can relate to this: When adversity hits in life, if you’re feeling really energized and healthy because you’ve been getting great sleep and eating well, your body feels good, then it’s easier to handle a stressful situation than when you feel like garbage.”

When it comes to the mental preparation, Foles listens to various podcasts or books on tape during his 35-minute commute to the Jaguars’ facility to help get him in a relaxed and motivated state of mind.

Sometimes the podcasts are health-related, like Asprey’s Bulletproof series, other times they’re faith-based books like his current favorite, A.W. Tozer’s book on prayer or Francis Chan’s Letters to the Church.

Once there, the growing relationships with his teammates and the reunion with offensive coordinator John Defilippo (his quarterbacks coach the Super Bowl year in Philadelphia) have further helped Foles find a place of comfort in his new surroundings and his new playbook.

A familiarity with Defilippo and his philosophies has given Foles a head start. Their relationship also translated into the coach giving Foles an ownership stake in the offense, ensuring that it's tailored to the quarterback’s strengths.

The journal entries have continued since the Super Bowl run, and Foles’ pen will flow furiously especially over the course of the next few days leading to training camp. The writings will feature a tone of reflection and encouragement, Foles predicted.

“A lot of times in these situations, I take a moment and reflect on life and the journey and times I’ve felt those ways. Whether it was being at Michigan State and starting over at Arizona or going to the NFL and think about all those moments, I just had to trust the Lord and be present,” Foles explained. “My mind does wander. I’m thinking about training camp right now because it starts (this) week. But I have to remind myself that if I’m so worried about that then I can’t see what’s in front of me, and that’s beautiful time with my family, time to enjoy these last couple days before it starts.”