Home » Business » Analysis: As mid-majors close the gap and pull upsets, parity grows in women’s game for even more Madness

Analysis: As mid-majors close the gap and pull upsets, parity grows in women’s game for even more Madness

Upsets, buzzer beaters and busted brackets are the foundation of March Madness, making this the best month of the year every year. Sunday night, after the first day of first-round women’s games went chalk, with every higher seed advancing — the first time that’s happened since 2010 — my phone started to buzz with texts from nervous friends. Were we really not going to have any upsets in the first round?

Part of why the men's tournament is so beloved is because everyone — especially Virginia — knows anything can happen. But the women's side doesn't have the same allure because many people (falsely) believe it's only top seeds that advance.

Relax, I told my friends. There’s still Monday, and some team is sure to catch a higher seed sleeping. We’ll get at least one Cinderella in Texas, maybe more.

Turns out we got three … all before dinner time.

Thirteenth-seeded Wright State, 12th-seeded Belmont and 11th-seeded BYU all slayed their own Goliaths on Monday, sending fourth-seeded Arkansas, fifth-seeded Gonzaga and sixth-seeded Rutgers packing, respectively, a boon to parity in the women’s game.

“I think [parity] is very important, the fans would love that,” said Wright State head coach Katrina Merriweather after the Raiders pulled off just the seventh 13-4 upset in women’s tournament history. “We love the idea of a David vs. Goliath and the opportunity to win games that people think we shouldn’t win based on our seeding.”

This week, more eyes than usual are on the women’s NCAA Tournament for a couple reasons.

First, with just a handful of fans and media attending men’s and women’s games in person, everyone is parked on their couch or at their desk watching on TV and the computer, allowing viewers to flip back and forth among eight channels and watch tons of basketball. Second, the glaring disparity in tournament quality and amenities has generated tons of social media outrage, and players and supporters have taken the opportunity to remind everyone that the best way to support women's sports isn’t to write angry tweets, but tune into games.

If you were smart enough to do that, you watched some terrific basketball, likely from a bunch of mid-major players you hadn’t heard of.

OPINION:  Buckle up for a wild, wacky ride in the women's tournament 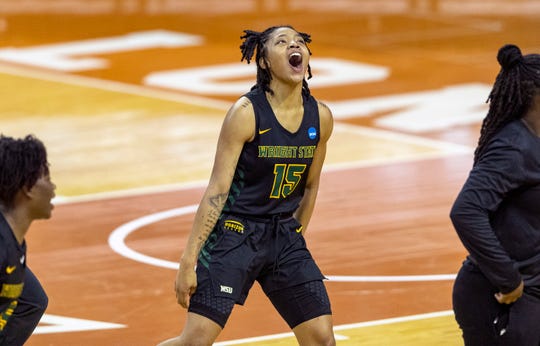