Home » Business » An Apple engineer built Hazel Health to upend the way kids get healthcare. We got an exclusive look at the presentation that convinced a major health insurer to back it.

Hazel Hazel works with school districts to provide video visits for kids that are reimbursed through the family's insurance. It also makes money directly from programs funded by schools and, in some states, Medicaid.

The company also has a few grants to finance telehealth visits students who are uninsured. Hazel currently has 1.5 million students enrolled in its care service for schools.

In September, Hazel raised $33.5 million in funding from investors including Centene, a $32 billion insurer. With the new funds, the startup says it can reach 30 million students in states like Florida, New York, Washington, and Illinois where it doesn't have existing infrastructure.

Since June, Hazel has grown by 400%, adding about 1 million students to the network, it said. while finding itself taking on two new roles: Reaching students in their homes for the first time, and advising their schools on testing and how to reopen safely while coronavirus outbreaks continue.

What won investors over

The coronavirus pandemic prompted the company to build its first consumer-facing product, a telehealth service available in homes and not just nurses' offices.

That, along with sign-ups from new school districts, led some key investors to get on board, Hazel CEO Josh Golomb said. Owl Ventures, Bain Capital Ventures, Centene, and UCSF Innovation Ventures all backed the five-year-old startup in its Series C round in September.

Hazel's work with Medicaid, the state and federal program that pays for medical care for some low-income Americans, played a big role in winning over Centene, since it's the largest Medicaid insurer.

Others were brought in by Hazel's user experience, which hints at Woods' background in iOS engineering for Apple. To raise the round, Hazel did more remote pitches and demos with investors.

That allowed the product to resonate as something special and different because of Woods' design, Golomb said.

"There's terrible software in healthcare," Woods said. "We wanted to make something that was beautiful and easy to use."

Business Insider got an exclusive look the pitch deck that won over the likes of Centene and Bain Capital. Some financial information has been excluded. Take a look:

Hazel kicks its pitch off with an introductory slide. Hazel works with its own doctors and local healthcare workers, to do virtual visits for grade school students. 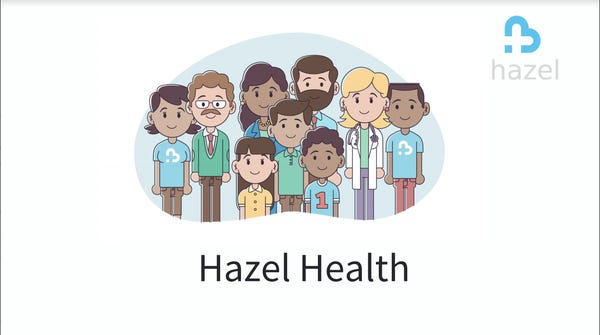 Hazel's deck then lays out its team and their backgrounds in tech and healthcare. Nick Woods, a cofounder and the CTO, came from Apple, Hazel's CEO Josh Golomb, came from DaVita, a $10 billion healthcare company that does kidney care, where he served as president. 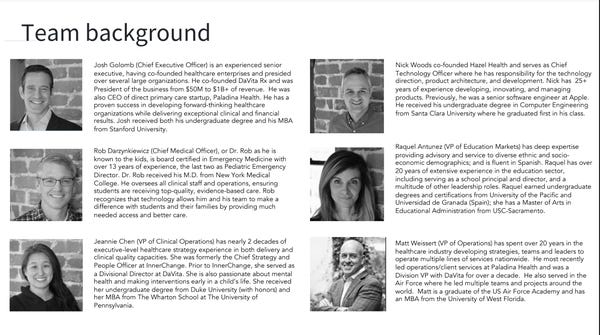 Even before telehealth took off during the coronavirus pandemic, Hazel had high adoption rates from students. On average, nine out of 10 students opt into the program once it's offered through their school. Students access Hazel in schools when they go to the nurse's office. From there, Hazel physicians do a video visit and, if needed, call the emergency room. 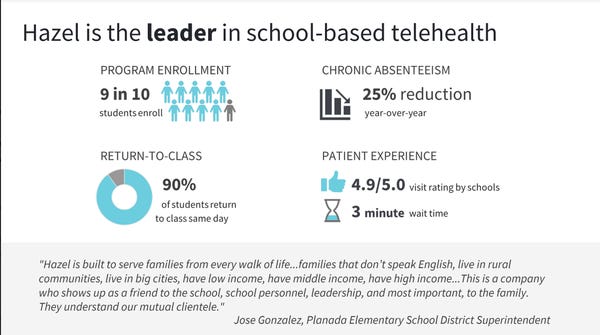 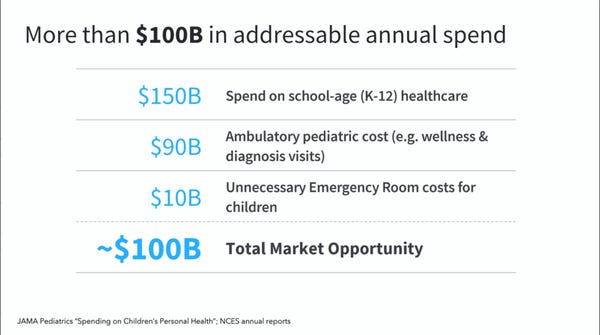 Hazel's membership grew by 400% over the last three months while the coronavirus pandemic prompted more people to try telehealth. 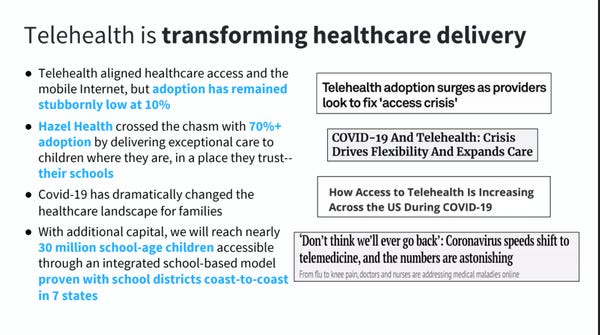 Golomb said Hazel's investors recognized that this was the moment to expand to more schools. Hazel's original investors encouraged Golomb and Woods to think about raising more money, since interest in telehealth was spiking. 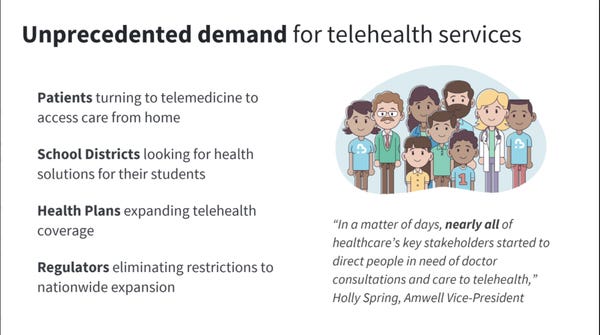 The startup is focused on bringing more care to more kids. By going through schools, they're able to reach students who sometimes don't have other healthcare resources. 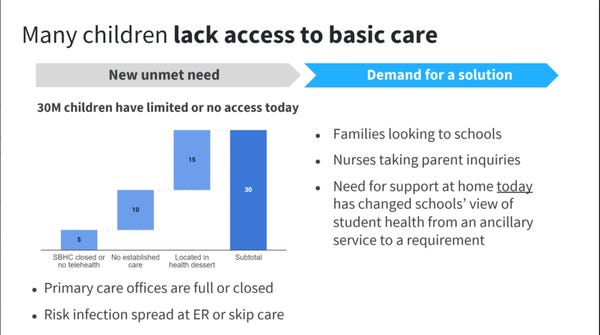 As more schools are doing remote learning, kids are getting Chromebooks and other tech that helps them access Hazel, Woods said. "They're not all going to go back to the way they were before," he said. 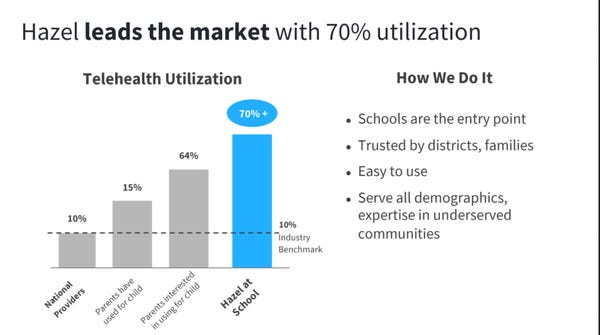 One of the most common questions they get from parents is whether they can use Hazel, too, the cofounders said. Hazel launched its first home-based service during coronavirus outbreaks as students got pushed out of schools. In time, it may expand to provide virtual visits for students' families in the future. 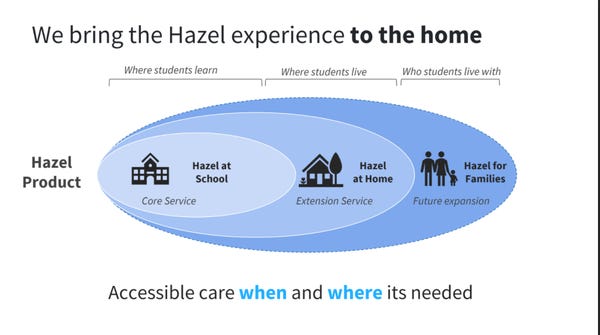 Most of students' health issues are addressable with Hazel's urgent and primary care appointments, the company said. Hazel hires its own doctors and healthcare workers to do visits, but sometimes works with other qualified doctors near schools if they want to do telehealth part-time. 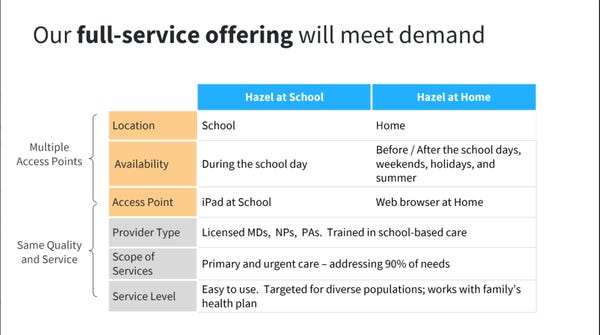 Eased federal regulations are paving the way for Hazel's national expansion, which it's funding with the $33.5 million it raised in September. 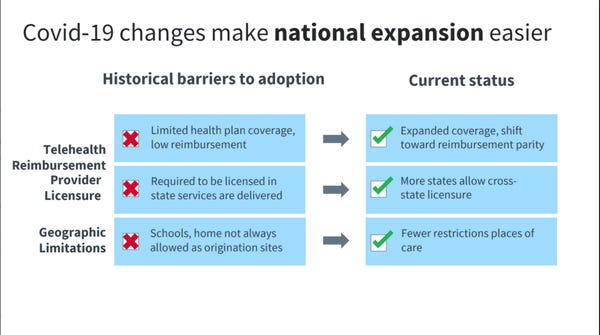 Hazel wants to reach 2 million students by the end of 2020, up from the 1.5 million it covers today. It's already got a sizable presence in California, Texas, and Nevada. 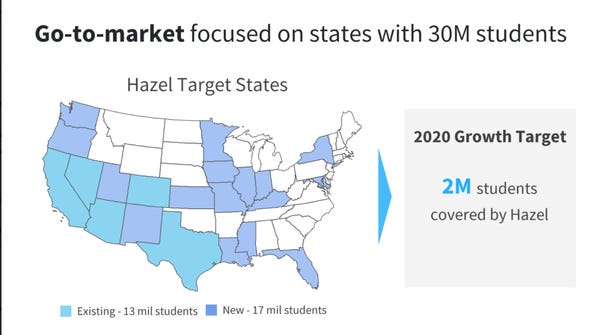