New York (CNN Business)Since the pandemic hit the US airline industry last March, major carriers have been burning through millions of dollars a day. For Delta Air Lines (DAL), at least, that ended last month.

The company reported it lost $2.3 billion in the first three months of the year, excluding special items. And although the airline still reported an average daily cash burn rate of $11 million a day throughout the quarter, it said that was due to the funds it spent through the first two months of the period. In March, Delta reported it was generating positive cash of about $4 million a day.
Cash generation and cash burn are not the same as profits and losses. There are many other expenses, including depreciation on aging equipment, such as planes, that aren’t factored into the cash burn rate.

But being cash flow positive is a critical milestone for a US airline since they have been burning through so much cash during the last year. That has forced the airlines to raise huge amounts of money from Wall Street — and slash expenses — to ride out the crisis. And now, Delta has been able to start paying down some of that debt.

That’s good news for Delta, though its net loss of $2.3 billion was more than Wall Street forecast. Shares were down about 2.5% in late morning trade.

‘Our business has made a turn’

“We see a path to returning to profitability” in the third quarter, Delta CEO Ed Bastian said in a call with investors Thursday.
That added to his comments earlier in the day during an interview on CNBC, when he said, “when I look at the first quarter, what’s been clear to us is that our business has made a turn.”
Rising levels of Covid-19 vaccination should continue to lead to increased demand for travel, Bastian said on CNBC, with 75% of customers telling Delta they expect to be fully vaccinated by Memorial Day.
“We’re seeing a huge surge in bookings over just the last couple of months,” he said. “In March we had twice the number of bookings that we had in January just two months earlier.”
Delta said in its release that those bookings are primarily for leisure travel, with the more lucrative business travel sector is still weak. Current domestic leisure bookings are “85% recovered” compared to 2019 levels.
“I think the pent-up demand is unbelievable,” Bastian said on CNBC. “We’re doing everything we can do to get ready to serve that demand we expect this summer.”
The company is selling middle seats once again for flights after April 30. It is the last US airline to have kept that middle seat open.
Most international travel is still halted, however, so Delta expects second-quarter revenue will still be down 50% to 55% from 2019.

Meanwhile, business travel is still only 20% of levels seen two years ago, Bastian said.
He said he is confident that business travel will pick up in the fall, even if it doesn’t return to pre-pandemic levels right away, as increased vaccination rates allow companies to reopen their offices throughout the summer. (Delta is reopening its own offices in June.) 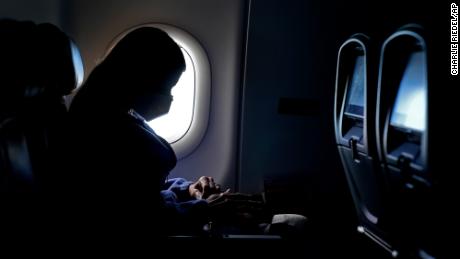 “People know they need to get back out on the road,” he said.
Delta cut its staff by nearly 20% in 2020, using voluntary buyouts and early retirement packages — no involuntary furloughs or layoffs — to reduce headcount from 91,000 to 74,000.
But now, Bastian said on the conference call, Delta could start hiring for some positions again soon.

“I do anticipate if we see the recovery continue to gain strength that before the end of the year, we could very well be in the market for both pilot and flight attendant hiring again,” he said.
Other major US airlines are due to report results next week. Shares of Delta (DAL), American (AAL), United (UAL) and Southwest (LUV) were all down slightly Thursday morning.
Source: Read Full Article