Daily passenger traffic fell from the peak of around 300,000 in February to less than 40,000 towards the end of May on the back of statewide lockdowns and mandatory RT-PCR testing. 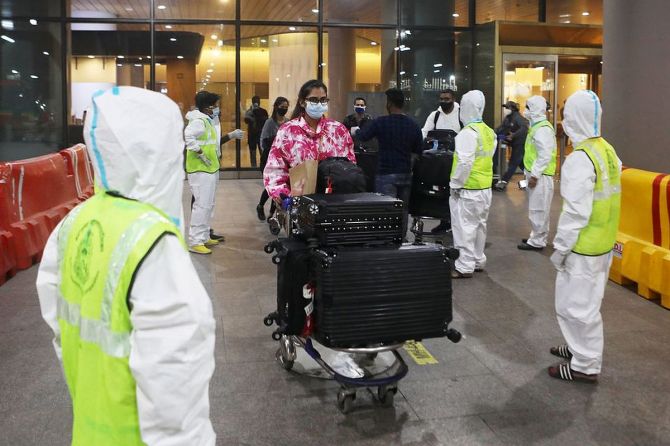 Airlines are slashing salaries and re-negotiating vendor contracts as drastic fall in passengers has hurt revenue.

Go First has cut staff salaries by around 16 per cent while IndiGo and SpiceJet are enforcing a leave without pay (LWP) policy and pay by the hour structure respectively to prune expenses.

Vistara, which reversed pay cuts for junior staff including managers and cabin crew in March, is not touching employee salaries at the moment and instead focusing on vendor renegotiation and maximising cargo revenue.

An Air India executive said efforts are on to pay salaries by 7th or 8th of June.

Daily passenger traffic fell from the peak of around 300,000 in February to less than 40,000 towards the end of May on the back of statewide lockdowns and mandatory RT-PCR testing.

This resulted in airlines grounding planes and cancelling fights.

Although the wage bill accounts for only around 10-15 per cent of expenses for no frill airlines, the management are looking at various ways to keep expenses in check.

“With a load factor of around 40 per cent airlines can’t recover costs.

“Yields too have been impacted. Loads need to increase at least to 65-70 per cent for a flight to break even,” an executive of a low cost airline remarked.

Go First had implemented an extensive LWP scheme last year and till recently around 700-800 staffers were impacted due to it.

It has reversed LWP policy but effected a fresh pay cut of around 16 per cent from May onwards.

The airline management however hopes that demand will recover from later this month and help it earn better revenue.

“This is the second pay cut in two years and this time management has cut our basic salary. Typically, a larger portion of pilot salaries would constitute flying allowances.

“But now pilot work hours’ have drastically come down due to a drop in the number of flights.

“A few months ago I would get to fly 40-45 hours per month and now it has come to down to less than ten hours,” a Go First pilot complained.

IndiGo has reintroduced its leave without pay policy from June.

“The second wave has been difficult for all of us and has also resulted in reduction of passenger loads.

“As a result our commercial schedule had to be curtailed accordingly.

“Unfortunately, due to the reduced capacity, we will have to institute an LWP programme for all employees which would range from 1.5 to 4 days depending on the employee group (except for band A &B).

“All pilots would undertake 3 days of LWP for the next 3 months effective June 1, 2021,” IndiGo wrote to employees.

SpiceJet is reverting to the structure of paying employees by hours worked and also announced a deferral of 35 per cent of salary to the majority of its employees.

Last month also the airline had deferred payment of upto 50 per cent salary of most employees citing Covid-19 business disruption.

“Our focus is to continue working towards achieving and maintaining a lean cost structure while exploring newer avenues to supplement our earnings.

“To this end, we have also been leveraging opportunities such as commercial cargo and charter flights, and also introduced other ancillary services in our effort to generate additional revenue,” Vistara said in a statement.

“Despite the current situation, one of our key priorities has been to protect all 4,000+ jobs at Vistara.

“The situation is highly dynamic at the moment and it is very difficult to predict the future.

“However, we will continue to closely monitor the market and take necessary steps as required,” the airline said.