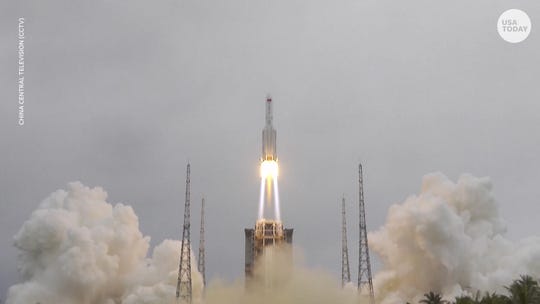 The Chinese rocket is 176 feet tall, which is bigger than the Statue of Liberty in New York. (Photo: China Central Television (CCTV))

Debris from a huge section of a Chinese Long March 5B rocket reentered the Earth’s atmosphere over the Indian Ocean near the Maldives, China’s space agency said, The New York Times and The Washington Post reported late Saturday.

The U.S. Space Command said it could confirm that the rocket reentered over the Arabian Peninsula at about 10:15 p.m. EDT, but that “it is unknown if the debris impacted land or water.”

It’s not the first rocket to fall to the earth in recent memory. Last year, part of a Chinese rocket, one of the largest pieces of uncontrolled space debris ever, passed directly over Los Angeles and Central Park in New York City before landing in the Atlantic Ocean, CNN reported.

The 18-ton rocket that fell last May was the heaviest debris to fall uncontrolled since the Soviet space station Salyut 7 in 1991.

China’s first space station, Tiangong-1, crashed into the Pacific Ocean in 2016 after Beijing confirmed it had lost control. In 2019, the space agency controlled the demolition of its second station, Tiangong-2, in the atmosphere.