It is followed by Bharti Airtel’s right issue in February 2019, when the company raised fresh equity capital worth Rs 25,000 crore (Rs 250 billion).

RIL also raised nearly Rs 1.5 trillion in FY21 by selling a minority stake in its tech and e-commerce arm Jio Platform to global tech firms, such as Meta and Google, and other international investors. 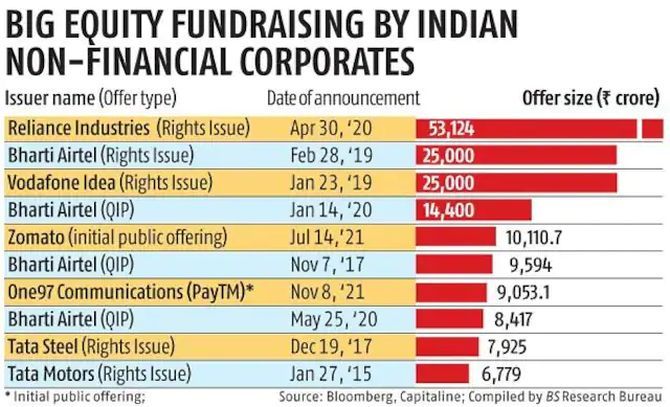 Other corporations that went for large equity fundraising through fresh issues of shares include food delivery major Zomato. It raised a little over Rs 10,000 crore (Rs 100 billion) via an initial public offering in July 2021, according to Capitaline Corporate database.

The list also includes the IPO by One97 Communications (Paytm) in November last year when it raised Rs 9,053 crore (Rs 90.53 billion) via fresh equity sale.

Paytm raised a total of Rs 18,300 crore (Rs 183 billion) via its IPO, but more than the half of the issue was a share sale by its existing shareholders and investors.

The telecom major cumulatively raised around Rs 57,400 crore (Rs 574 billion) through rights issues and QIPs in the past five years, followed by RIL.

The analysis is based on primary and second equity issuances by all the listed companies in the past 10 years but only includes those offers where the company raised fresh equity capital by issuing new equity shares to investors.

Business Standard data excludes public issues where existing shareholders or promoters exited the company or raised capital by selling part of their stake in an IPOs or follow-on offer (FPO).

This excludes IPOs and FPOs by public sector companies as part of the central government divestment programme.

The analysis also excludes large open offers where existing promoters raised stakes in their companies, such as Unilever’s open offer for its Indian subsidiary Hindustan Unilever worth Rs 25,400 crore (Rs 254 billion) in March 2018.

The proposed equity issuance by Adani Enterprises is worth less than 5 per cent of its current market capitalisation of Rs 4.45 trillion and will dilute its equity base and earnings per share by 5-6 per cent at best.

This, according to analysts, would not have any major negative impact on its share price.

Large equity issuances and the resulting dilution generally result in a decline in share price.