On July 29, 1967 the USS Forrestal was deployed to the Gulf of Tonkin for operations against Vietnam when the unthinkable happened: An electrical surge on an F-4 Phantom caused the accidental launch of a Zuni rocket into a combat-loaded A-4 Skyhawk.

The plane burst into flames, and its fuel spread across the flight deck. In a hellish chain reaction, bomb after bomb exploded, rocking the entire ship.

The fire raged for hours, killing 134 sailors, destroying 24 aircraft and causing more than $70 million in damages. 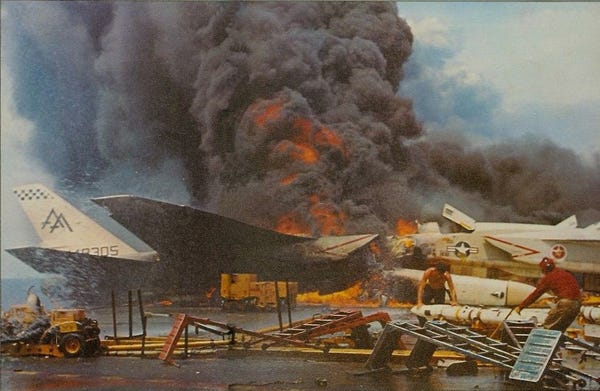 The fleet took note and overhauled its entire training program. New regulations and improvements were made to training and processes, much of which are still in use today.

Also of note is that future Sen. John McCain, a lieutenant commander at the time, barely escaped the first explosion near the stern by unstrapping from his seat, jumping from his A-4’s refueling probe, and sprinting as fast as he could toward the bow.

There’s a saying in the Navy that training publications are written in blood. Here’s why that statement is 100% true:

It all started with an accidental rocket launch 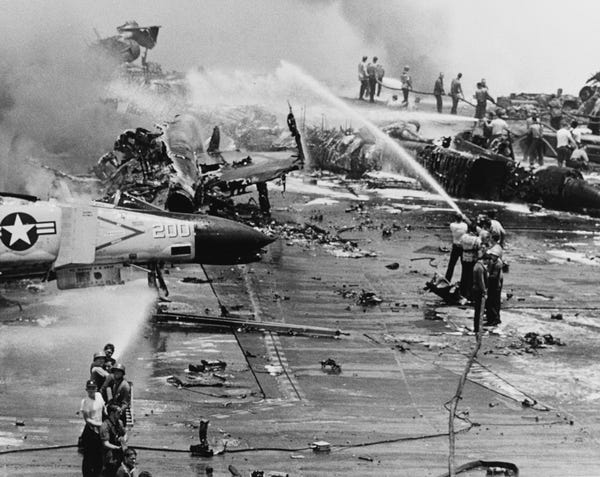 Fuel and fire spread throughout the flight deck causing a chain reaction of ordnance explosions.

There were nine massive explosions like the one below within the first five minutes. The two firehose teams in the first explosion were completely wiped out.

A fire at sea is a sailor’s worst nightmare because there’s nowhere to go. You have to fight the fire or die. Some were blown overboard by the blasts. Others had no choice, burn or jump.

This video (actual footage of the mishap) shows how the sailors eventually got the fire under control and saved the Forrestal: