Lester Holt was due to fly to Tokyo in less than 24 hours to cover the year-delayed Summer Games, when Toshiro Muto, chief of the organizing committee, said last Tuesday that he could not rule out an 11th hour cancellation of the troubled $15 billion event. It was only the latest in a steady stream of dire pronouncements emerging from Japan since the International Olympic Committee determined to forge ahead with a global sporting event in the midst of a pandemic.

Holt was not fazed.

“I was not at all surprised to hear the Games were subject to cancellation even that close to the Opening Ceremony,” said Holt.

The “Nightly News” anchor boarded his flight last Wednesday and — after completing reams of paperwork on the plane and enduring three hours of checkpoints and medical screening (including a COVID-19 test) — was anchoring the newscast from Tokyo by Thursday, one day before the Opening Ceremony.

“Lester and I had a good laugh about it,” says “Nightly” executive producer Jennifer Suozzo, who remains working Stateside. “You have to just kind of throw your hands up and go with it. The worst that happens is he gets over there, he turns around and comes back. It’s not like ‘Nightly News’ would have six black holes. That would be the story.”

And the Tokyo Olympics are quite a story. Two weeks before the Games, the host city declared a state of emergency amid rising COVID-19 cases and a perplexingly sluggish vaccine rollout given the long specter of a massive sporting event that would draw nearly 100,000 people (including more than 11,000 athletes, Olympic support staff and journalists) to Tokyo. The stream of negative headlines has amassed for months, including dire surveys about how unpopular the Games are with the denizens of Tokyo, many of whom have fled the city (which can be brutally hot and humid in the summer) during the Games. Several prominent Japanese advertisers (including Toyota and Panasonic) have pulled their advertising from coverage of the Games on Japanese television, while their executives declined to attend the Opening Ceremony. Several athletes have been knocked out of competition as mandatory COVID-19 tests came back positive, including U.S. tennis star Coco Gauff. Olympic venues remain devoid of crowds, after earlier hopes of 50 percent capacity were dashed amid the surging Delta variant.

But, says “Today” anchor Savannah Guthrie, “when you look at those athletes’ faces, they are so thrilled, even behind masks, their eyes are lighting up. This is their moment. The competition is still excellent. The work and their dedication is still infectious. The ideal is still beautiful.”

NBC’s coverage of the Games has not ignored the realities of the situation on the ground. “It’s important to all of us that our tone matches the moment,” says Guthrie, during a phone interview from Tokyo. “We’re not trying to be overly celebratory or pretend that we’re not living in a world that is in the midst of great difficulty. We are and it is. We are very cognizant of that and are very focused on making sure our coverage matches that fact. We’re also conveying the sense of joy and pride that the Olympics always engenders and that our athletes deserve. It’s a delicate balance. But it’s one that we are very much focused on getting right.” 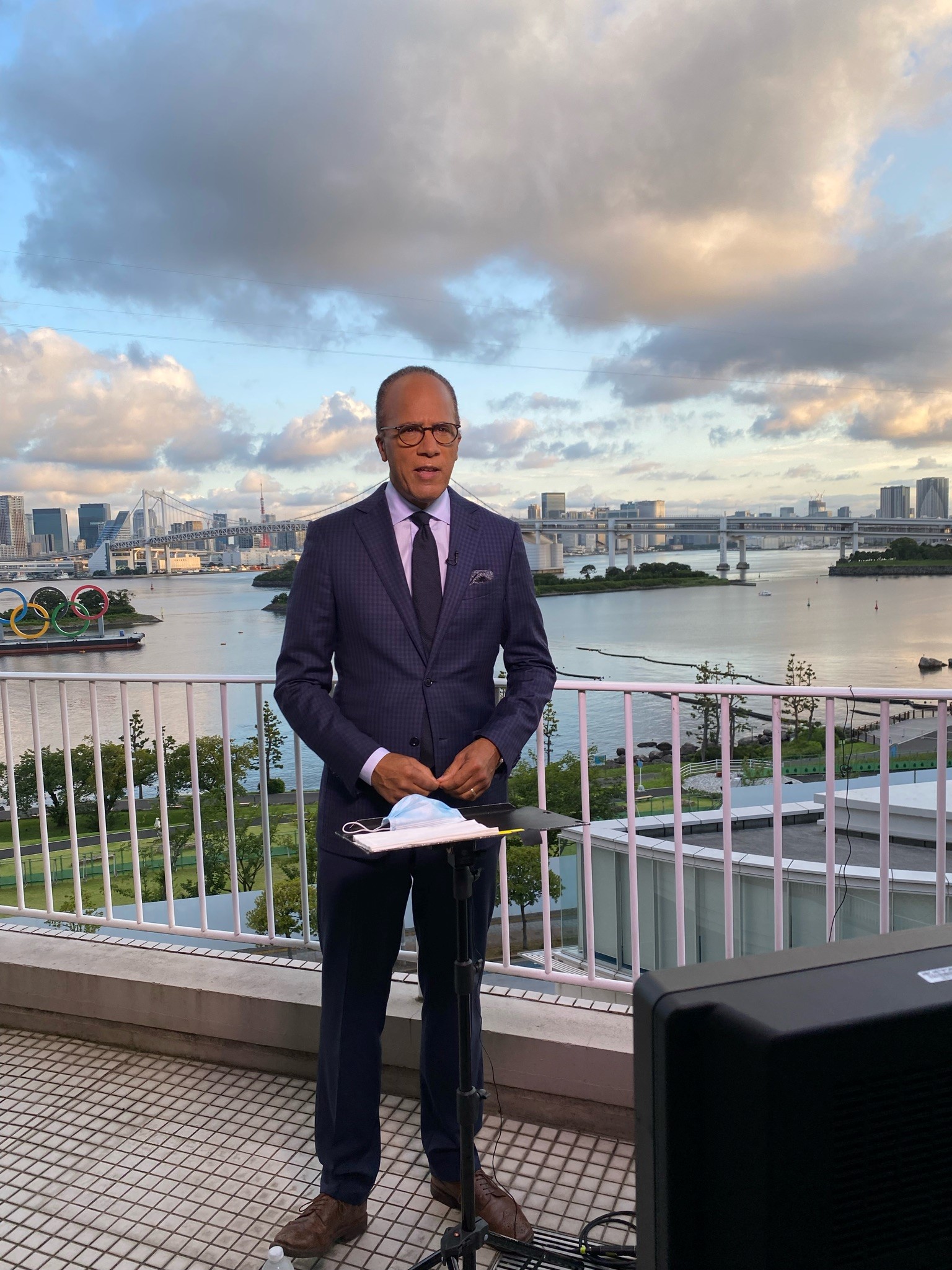 NBCUniversal has paid dearly to maintain its grip on what has always been a crowd-pleaser, albeit with obligatory geopolitical hiccups. In 2011, the company paid $4.38 billion for four Olympic Games, including $1.5 billion for the U.S. broadcast rights to Tokyo. Three years later, it shelled out another $7.75 billion for the rights to the next six Olympics through 2032. NBCUniversal executives have said that ad revenue haul — which this time included streaming service Peacock — has exceeded the $1.2 billion that the 2016 Rio Summer Olympics brought in. Thirty-second spots during the Tokyo Games are averaging $1.2 million. That’s all despite predictably soft linear TV tune-in given the 13-hour time difference and audience declines across linear TV in general.

The Opening Ceremony drew 16.7 million, the smallest audience for an Olympic opener in more than 30 years, though usage on NBCOlympics.com and the NBC Sports app increased 76 percent from the 2018  Opening Ceremony in PyeongChang and 72 percent from Rio. Even by today’s standards of diminished linear television consumption, the Games offer NBC an invaluable promotional platform. Sunday’s competition, which included men’s swimming and women’s gymnastics, drew more than 15 million viewers, far more than anything else on TV.

COVID-19 restrictions have limited the number of personnel NBC could send to Tokyo, and so more aspects of production have been shifted to its broadcast center in Stamford, Conn. NBC Sports has about 1,600 staffers in Tokyo, down from close to 2,000 it would normally send to cover an Olympics with more disciplines (like skateboarding) than any Summer Games; there are 50 different sports and 339 events, compared to 41 sports and 306 events in Rio. With a ballooning staff Stateside, NBC even commandeered the ballroom of the downtown Stamford Marriott, where about 50 NBC Sports staffers will work for the duration of the Games.

The “Today” crew is busy creating a large set on Rockefeller Plaza with the intention of hosting returning U.S. Olympians, beginning with the second week of competition. And because there were no fans in Tokyo, a top priority has been to curate a vaccinated audience of family and fans in the U.S. for the returning athletes.

“We’re always viewing [the coverage] through the lens of the athletes and as soon as you hear their personal stories and see how hard they’ve worked, and the fact that they’re doing this without fans and without their families there, makes it even harder,” says Libby Leist, senior vice president of “Today” and NBC News.

Guthrie is already on her second week in Tokyo, having arrived early to prep for the Opening Ceremony, which she hosted with Mike Tirico, who handles NBC Sports’ primetime Olympic coverage. Her “Today” co-anchors including Hoda Kotb, Craig Melvin and Al Roker have also since arrived in Tokyo. NBC News also sent Tom Llamas and Keir Simmons earlier, so that they could meet the country’s 14-day mandatory quarantine period before going into the field in Tokyo. Holt, who will be in Tokyo at least through the end of the week, says he adjusts to the 13-hour time difference and nocturnal hours necessitated by a U.S. broadcast schedule by abstaining from alcohol and sticking to an exercise routine (in his room of course). Guthrie has a circa-1995 step workout platform in her room. Both Guthrie and Kotb will be back at Studio 1A for the second week of competition to handle interviews with returning athletes. 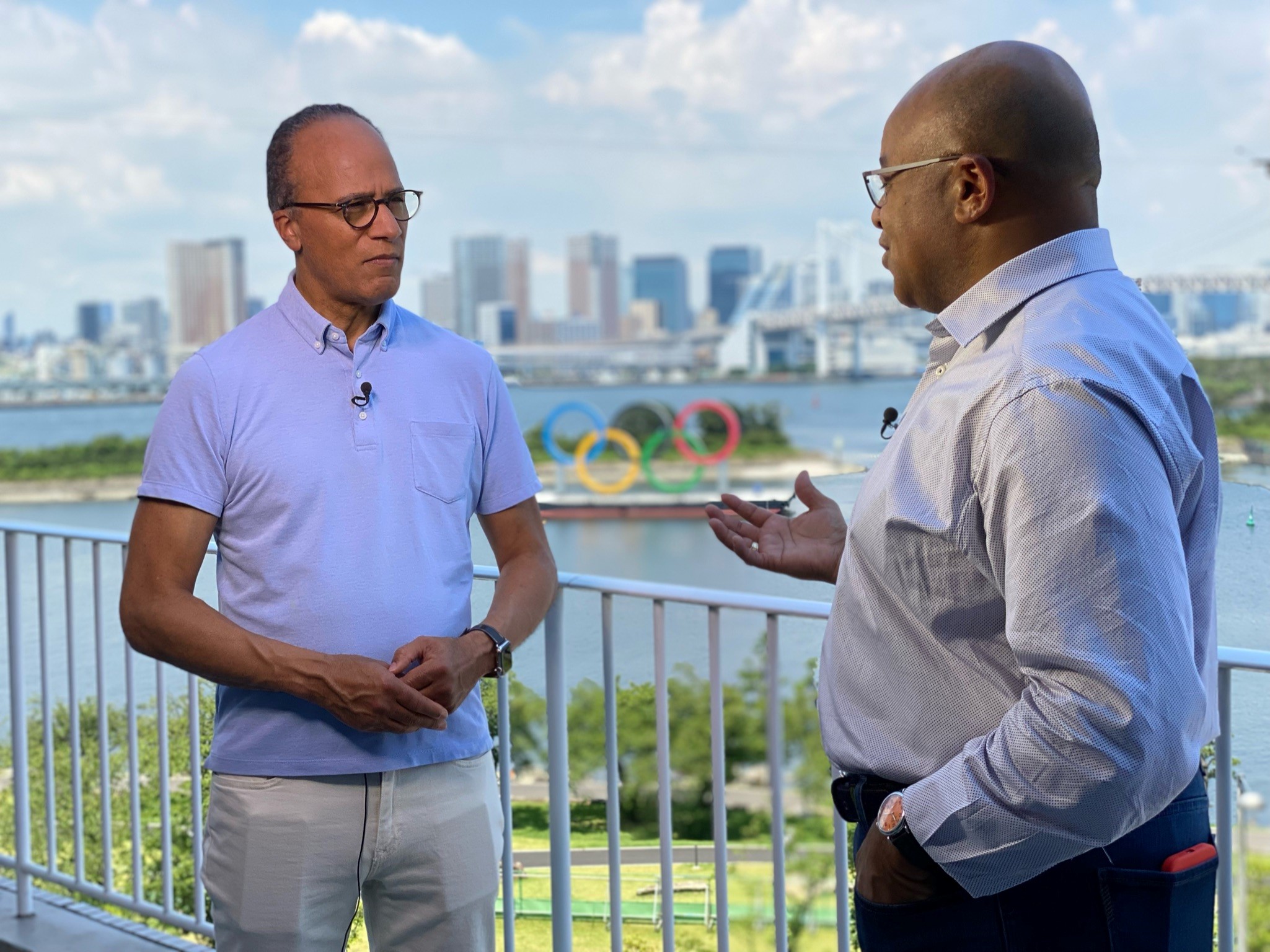 Holt has been able to do some field pieces, but Guthrie is largely confined to the broadcast set at the Hilton Tokyo Odaiba, where NBC personnel are also staying. Her 1 million Instagram followers have been treated to pictures from her balcony, which boasts a stunning view of Tokyo.

“It’s so close yet so far,” she says. “I can see Tokyo, but I can’t go there. It’s really closed off and buttoned up and it’s by design. The entire concept is to keep those who have traveled in for the Olympics totally separate from the population of Tokyo in order to keep the population of Tokyo safe. For that reason there is no intermingling, period. So you don’t get a sense of the street. You don’t get a sense of how people feel. You’re not interacting, to say nothing of the language barrier. You know that you are looking at one of the most exciting vibrant beautiful cities and you can’t touch it.”